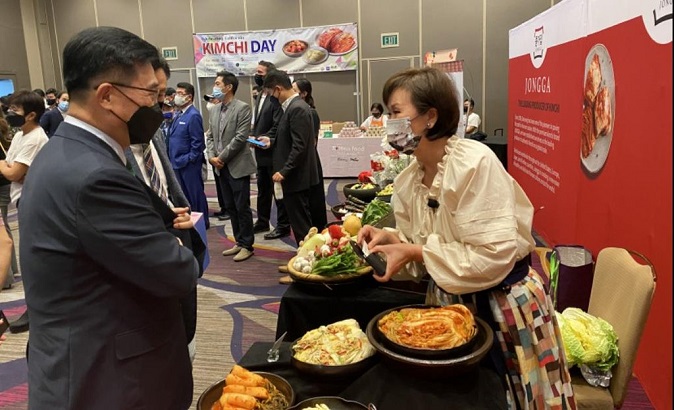 This photo, provided by the Korea Agro-Fisheries & Food Trade Corp. (aT), shows an aT-organized event to promote kimchi in Los Angeles on Aug. 23, 2021, on the occasion of the passage of a resolution by the California State Assembly to designate Nov. 22 as the state’s Kimchi Day.

SEOUL, Oct. 25 (Korea Bizwire) — South Korea plans to hold a food fair next month to promote the country’s agricultural and other food products, and to help local companies’ advance into the global market, the agriculture ministry said Monday.

During the four-day K-Food Fair set to kick off Nov. 8 at the Convention and Exhibition Center in southern Seoul, some 200 local companies will present major export items, such as kimchi, pears and ginseng, according to the Ministry of Agriculture, Food and Rural Affairs.

One-on-one online consultation sessions between local firms and about 94 foreign buyers from 24 nations, as well as such events as livestreaming e-commerce sessions and online cooking classes, will also take place, it added.

South Korea’s fresh food has drawn growing global attention, with exports rising 12.3 percent during the first nine months of 2021 from a year earlier, on the back of the popularity of Korean pop culture, according to the ministry.