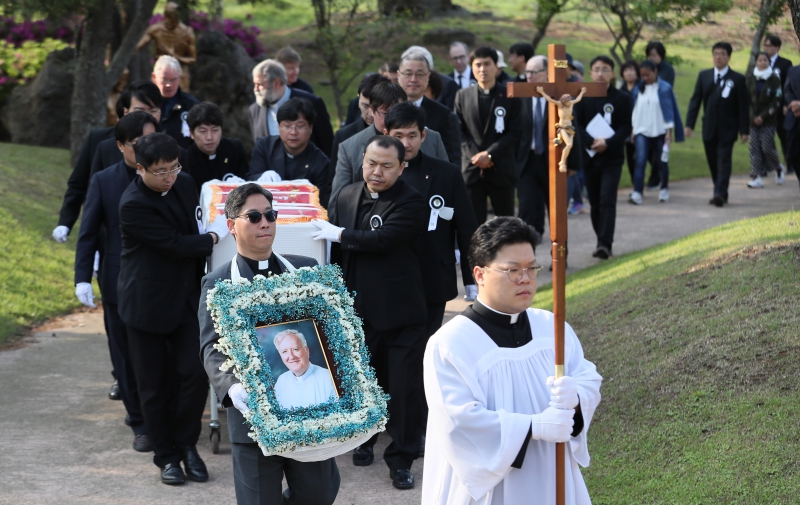 JEJU, May 16 (Korea Bizwire) — The story of Father Patrick James McGlinchey, known in Korean as Yim Pee-jae, has been developed into a documentary film.

The Yim Pee-jae Commemorative Project will screen a sneak preview of the documentary film ‘Isidore, The Miracle of Jeju’ at Megabox Jeju on May 25.

Yang Jin-gun, the film’s producer, spent three years crafting a narrative about the passion and achievements of Father McGlinchey. The film depicts how Fr. McGlinchey and his St. Isidore Farm changed people’s lives on Jeju Island.

The honored Irish priest was born in 1928 and came to Jeju when he was 23 years old. He was sent as a missionary by the Missionary Society of St. Columban.

As soon as he set up a church, he established St. Isidore Farm to introduce new farming methods to local residents, who were making use of primitive farming methods that only led them into heavy debt.

He found a credit union to help them break free of debt, and this transformed the economy of the island.

He was also known as the blue-eyed pig priest after importing a few piglets to give them to local children to raise and breed.

Under his watch, a hospital, a nursing home, school, youth center and retreat center were built to help the underprivileged. In 2007, St. Isidore Hospice was founded to provide free hospice care for those with limited financial means.

Fr. McGlinchey was presented with the Irish Presidential Distinguished Service Award for more than 60 years of dedicated service in 2014. He also received a number of prestigious awards, including the Ramon Magsaysay Award, the Order of Civil Merit (Second Class), the Red Cross National Award, and a Jeju Culture Award.

The Yim Pee-jae Commemorative Project was established in 2014 to encourage the next generation of Catholic priests to follow in Fr. McGlinchey’s footsteps. It aims to continue the legacy that was left behind on the island.