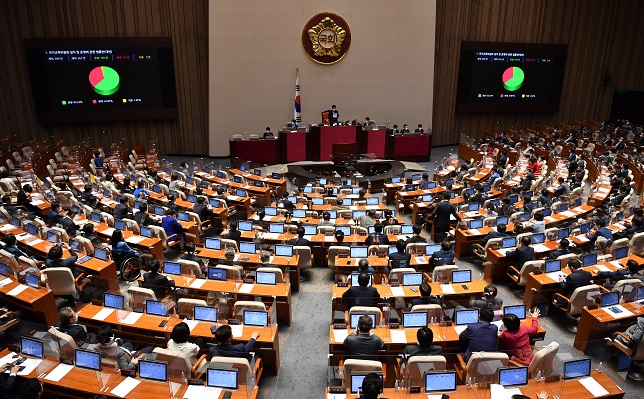 This image shows a plenary meeting of the National Assembly on July 1, 2021. (Yonhap)

SEOUL, July 3 (Korea Bizwire) — A new act will enable South Korea to establish a national committee in charge of ensuring the country follows a stable, long-term education policy regardless of a change of government, officials said Saturday.

Earlier this week, the National Assembly’s plenary meeting passed a relevant act on the establishment and management of the envisioned national education committee.

The launch of the committee was part of President Moon Jae-in’s election campaign, aimed at ensuring that the country’s education policy, often reversed and revised upon the inauguration of a new administration, is established and implemented in a stable, long-term manner.

The committee is expected to set sail in July next year at the earliest, after Moon’s five-year terms ends in May, in accordance with the law that takes effect one year after its promulgation.

Once launched as a decision-making body directly under the presidency, the committee will be in charge of drawing up, via social consent, a broad 10-year education development plan for the education ministry to follow in establishing detailed policies.

The National Assembly will be entitled to recommend nine of the committee’s 21 members while the president will be given the right to name five of them.

It will also include as its members the deputy education minister as well as those recommended by various education-related bodies.

The scope of the committee’s decision making will range from the school system, policies on teachers and university admission as well as the size of each school class to the standard of the overall national education process.

The Ministry of Education welcomed the law’s passage and pledged to speed up steps to launch the committee.

“The national education committee will serve as new governance enabling the push for coherent education policy independently of the (sitting) government and political parties,” Minister Yoo Eun-hae said right after the parliament approved the bill on Thursday.

The new law championed by the ruling Democratic Party, however, ran into protests by the main opposition People Power Party (PPP), which argued the committee’s jurisdiction overlaps with that of the education ministry.

The composition of the committee’s membership, as currently required by the new law, may also eventually tilt the committee toward the side of an administration in power, the party also claimed.

“Wielding the power to set long-term policies that transcend the presidency is also against the principle of democratic policy (making),” PPP lawmaker Chung Kyung-hee said in her speech against the bill before it was put to a vote.