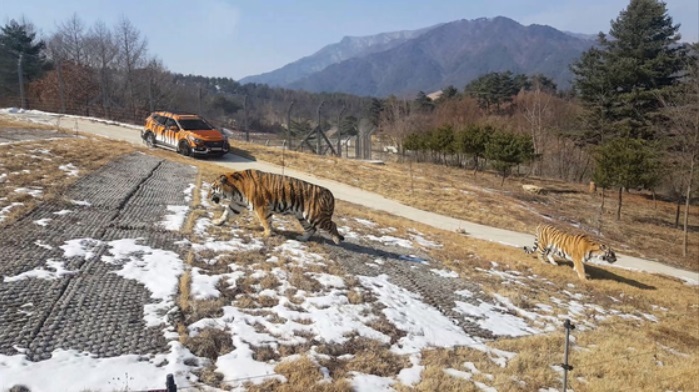 The two Siberian tigers — a 13-year-old female named Hancheong and a seven-year-old male named Uri — at the arboretum on a mountain range near Bonghwa. (image: National Baekdu-daegan Arboretum)

BONGHWA, Apr. 24 (Korea Bizwire) — South Korea’s forest authorities said Tuesday they plan to open an arboretum with two Siberian tigers strolling in a “tiger forest” in southeastern South Korea next week as part of efforts to preserve the endangered species in the wild.

The Korea Forest Service will open to the public on May 3 the National Baekdu-daegan Arboretum located on a mountain range near Bonghwa, a town in South Korea’s southeast province of North Gyeongsang, before showing visitors the two Siberian tigers — a 13-year-old female named Hancheong and a seven-year-old male named Uri from Seoul Grand Park — in the arboretum’s 4.8 hectare forest the following day.

The arboretum, which has been established on a site of 27,600 square meters as the largest one of its kind in Asia, is also equipped with a natural vault to store up to 56,670 seed samples of 3,200 species and 27 exhibition gardens including an alpine swamp and a wild flower hill. It is also home to 3.85 million plants of 2,002 species.

According to the arboretum, the tiger forest, as large as seven full-size soccer pitches and the largest one displaying tigers in South Korea, is made to be similar to the natural habitats where wild tigers live and has safety fences around it that keep the tigers from escaping to ensure the safety of visitors who come to see them roaming in the wild.

The arboretum plans to release another male tiger named Duman, 17, donated by China and transported from the Korea National Arboretum in the town of Pocheon, northeast of Seoul, to the tiger forest after training on him for his reintroduction to the wild following the arboretum’s opening.

The tigers’ lengths range from 240 centimeters to 300 centimeters and their weight from 200 kilograms to 300 kilograms, with their average life expectancy reaching around 20 years.

In the tiger forest, the tigers are fed 5 kilograms of chicken and 1.5 kilograms of beef daily, brought to the tiger pen at nighttime. They are allowed to visit the forest at daytime. Around the forest are placed electronic fences and 5- meter-high barbed wire fences.

The arboretum plans to bring 10 additional tigers to the forest for its ecological study on the species, which will help it preserve the animal.

Siberian tigers, also called Mount Paekdu tigers, are known to have last been captured in the wild on the Korean Peninsula in 1921. In South Korea, 50 Siberian tigers are raised in zoos nationwide.