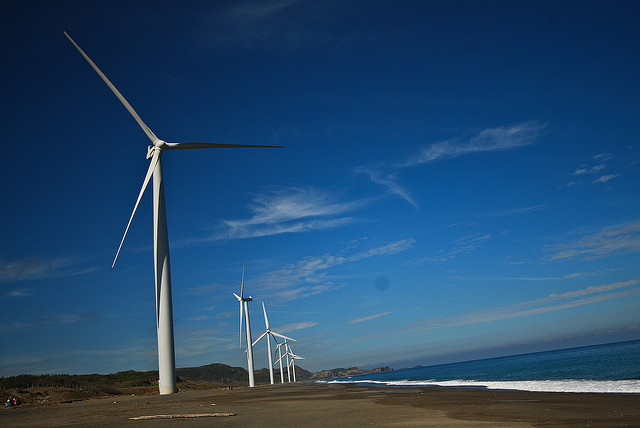 The latest measures are aimed at developing the country’s clean energy industry into a 4.6 trillion won market and creating some 14,000 new jobs by 2017. (image: Artemyo Lagalag/flickr)

SEJONG, April 22 (Korea Bizwire) – South Korea will invest over 1.8 trillion won (US$1.66 billion) this year to help boost the clean and renewable energy sector with the related market expected to be worth some 4.6 trillion won by 2017, the government said Wednesday.

Under the new measures, approved at an economic ministers’ meeting Wednesday, the government will spend 430 billion won in 2015 alone to develop key technologies, such as those related to bioenergy, fuel cells and carbon capture sequestration, according to the Ministry of Trade, Industry and Energy.

The latest measures are aimed at developing the country’s clean energy industry into a 4.6 trillion won market and creating some 14,000 new jobs by 2017. The measures also come as part of the country’s efforts to reduce its greenhouse gas emissions by 30 percent from its business-as-usual level in 2020.

The government plans to spend an additional 137 billion won this year to help create local niche markets for the clean energy industry while public firms and private companies are expected to invest some 1.26 trillion won for the purpose, the ministry said.

The measures also call for efforts to increase the number of electric vehicles operated in the country from the current 3,000 to 47,000 by 2017. To this end, the government will build 575 new fast chargers for plug-in vehicles across the country over the next three years.

In addition, the government will work to increase the number of energy-sufficient islands to nine from the current one. Such islands will rely on clean, renewable energy, as well as energy storage systems, to permanently break off from the use of fossil fuel for power.

The benefits of developing brand new technologies and clean energy sources will also be extended to other countries, partly through exports but also through the country’s official development aid.

The government plans to help build at least three energy-independent islands in other countries, the ministry said.