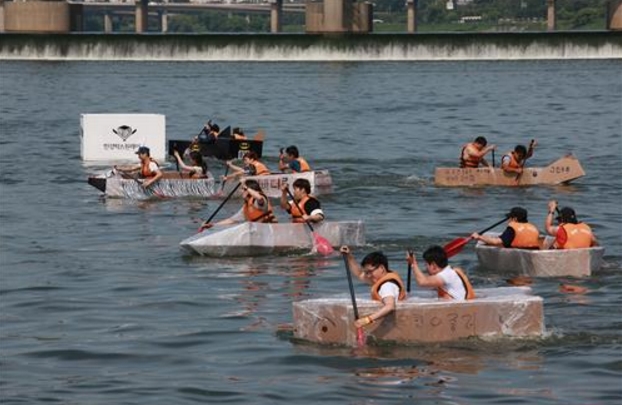 Each team of four or less people can participate in the ‘speed’ race, or families can experience the ‘fun’ race. (image: Yonhap)

SEOUL, July 29 (Korea Bizwire) – The Seoul Metropolitan Government’s Han River Project Headquarters announced on July 29 that it will hold ‘Han River Paper Boat Races’ on July 30 and 31, and on August 6 and 7 at Jamsil’s Han River Park.

Similar races are held regularly in other countries including the U.S. and Britain, and paper boats made out of corrugated box will be used in the Korean races, which will be a part of Seoul summer festivals.

Each team of four or less people can participate in the ‘speed’ race, or families can experience the ‘fun’ race.

The prize for the first place team is a kayak worth 2.5 million won ($2200). Other prizes such as gift certificates are also available for different races.

Tickets can be purchased on the Ticketmonster website (ticketmonster.co.kr), or on the Seoul public service reservation system (yeyak.seoul.go.kr). The first 800 teams to register will receive guaranteed spots to participate in the races, and a ticket for each four-person team costs 40,000 won.

Details are available on the Seoul Metropolitan Government website (hangang.seoul.go.kr/project2016), or the Han River Project Headquarter’s Water Sports Department (02-3780-0832) can be contacted for more information and other inquiries.

For safety concerns, the race will be canceled if 20 mm of rain falls during the planned hour, or the discharge rate of the Paldang Dam exceeds 1,500 m3/sec.