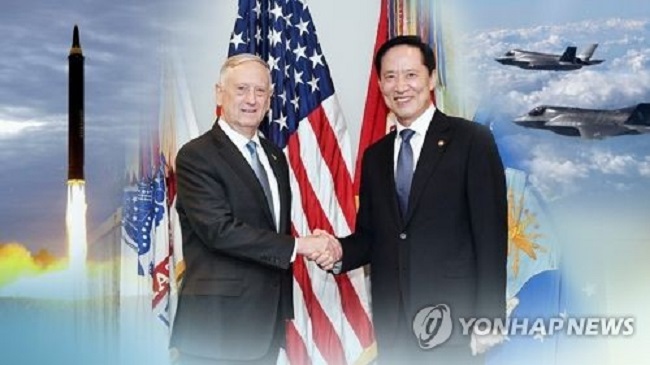 WASHINGTON, Jan. 25 (Korea Bizwire) — The defense chiefs of South Korea and the United States will meet in Hawaii Friday to discuss issues related to the bilateral alliance, including North Korea.

Speaking to reporters Wednesday, U.S. Defense Secretary Jim Mattis said he will meet with South Korean Defense Minister Song Young-moo on his way home from his current trip to Asia.

“Just because we have an opportunity out here to link up in the field, makes it easier for both of us — on the travel side,” he said en route from Indonesia to Vietnam, according to a Pentagon transcript.

South Korea and the U.S. want to closely coordinate their approach to North Korea in the wake of the regime’s recent overtures for dialogue with Seoul. This month’s first high-level inter-Korean talks in more than two years led to Pyongyang’s agreement to participate in the PyeongChang Winter Games in February and March.

Critics say the North is trying to win concessions from Seoul and improve its image in the face of increasing international sanctions over its nuclear and ballistic missile programs.

“We won’t get into the specifics of their conversation until after the meeting,” he added.

South Korea’s defense ministry has also kept mum, but indicated they could address issues related to the bilateral alliance and the PyeongChang Olympics.

Seoul and Washington have postponed their annual military exercises to ensure Pyongyang does not conduct nuclear or missile provocations around the Olympics. North Korea views the drills as an invasion rehearsal.

Mattis reiterated the U.S. will not accept North Korea as a nuclear power.

“It is the public and stated policy of the United States, of Republic of Korea, of Chinese, of Russian Federation, and I can go on, that the Korean Peninsula, due to its unique circumstance, the fact that there’s been no peace treaty, just an armistice, this is not a place where the international community can tolerate nuclear weapons,” he said, referring to the 1950-53 Korean War that ended in a truce, leaving the Koreas technically at war.