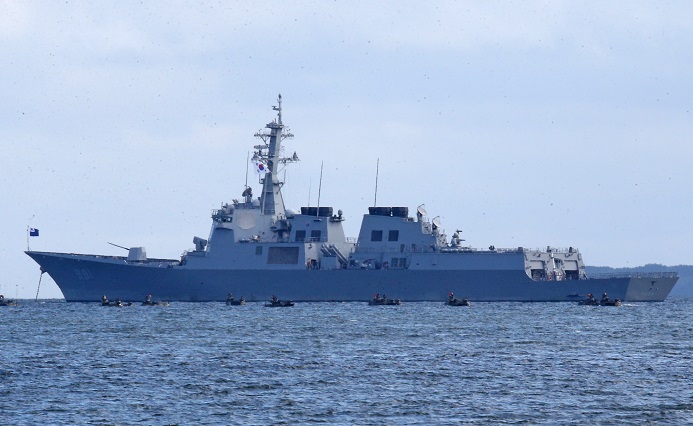 This file photo taken Oct. 1, 2021, shows the Sejong The Great destroyer operating in waters off the southeastern port city of Pohang. (Yonhap)

The biennial Pacific Dragon exercise is scheduled to take place from Monday through Aug. 14, according to them. In addition to the three countries, Australia and Canada will join the exercise in this year’s edition.

Featuring the mobilization of eight warships and two aircraft, the exercise is aimed at enhancing cooperation among the participating countries in detecting, tracking and reporting ballistic missile targets.

The exercise has been arranged as the defense chiefs of South Korea, the U.S. and Japan agreed to reinforce their security coordination during their trilateral gathering on the margins of the annual Shangri-La Dialogue in Singapore on June 11.

At the talks, the three agreed to conduct the South Korea-U.S.-Japan missile warning, and ballistic missile search and tracking exercises. Since 2018, the trainings had proceeded in a low-key manner amid efforts to facilitate diplomacy with North Korea.

The three nations have recently been seen closing ranks amid concerns that the North could further ratchet up tensions by conducting what would be its seventh nuclear test or other provocative acts.