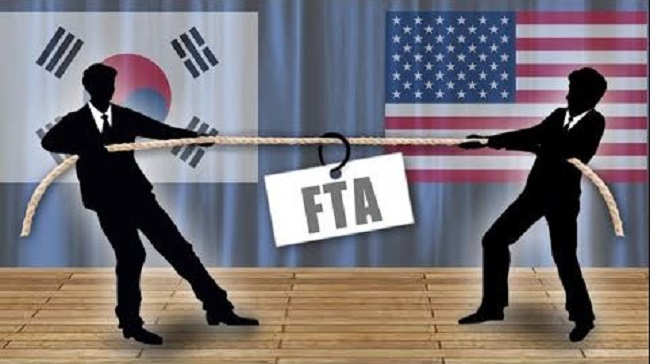 South Korea and the United States plan to hold the second round of talks to amend their free trade pact in Seoul next week, Seoul’s trade ministry said Friday, amid mounting U.S. trade pressure. (Image: Yonhap)

Trump signed a set of safeguard measures earlier this week against imported large residential washing machines and solar cells, including those from South Korea.

Seoul and Washington held their first round of renegotiation talks in Washington earlier this month to revise the 5-year-old deal, but the two sides failed to narrow differences on key issues, such as automotive parts.

Kim Hyun-chong, Seoul’s trade minister, said earlier he expects growing pressure from the U.S. in the upcoming negotiations, but stressed that Seoul will seek to revise the investor-state dispute settlement (ISDS) clause and explore ways to protect the agriculture industry, which has suffered since the implementation of the FTA.

With the ISDS provision, investors can sue countries for alleged discriminatory practices through international arbitration bodies. Local experts have expressed concerns that large multinational companies could exploit the clause, leading to the infringement of South Korea’s judicial sovereignty.

Seoul officials also anticipate increased pressure on the auto industry, which accounts for a large part of the trade surplus with the U.S. About 80 percent of South Korea’s trade surplus came from the auto sector in 2016.

Industry officials said the percentage of U.S. auto parts used by South Korean carmakers could become an important issue. This is also a thorny issue for the U.S. in ongoing North American Free Trade Agreement negotiations with Canada and Mexico.

While the FTA has boosted auto trade between the two nations, South Korean companies have enjoyed greater benefits thanks to the bigger size of the U.S. auto market, which is about 10 times that of the domestic market.

Meanwhile, the Seoul government is expected to raise the topic of U.S. safeguard measures against South Korean washing machines and solar cells.

The trade ministry here said it had proposed a bilateral meeting with U.S. Trade Representatives as early as next week to discuss the safeguard actions, while planning a petition with the World Trade Organization against the U.S. government for the heavy anti-dumping duties on Korean goods.