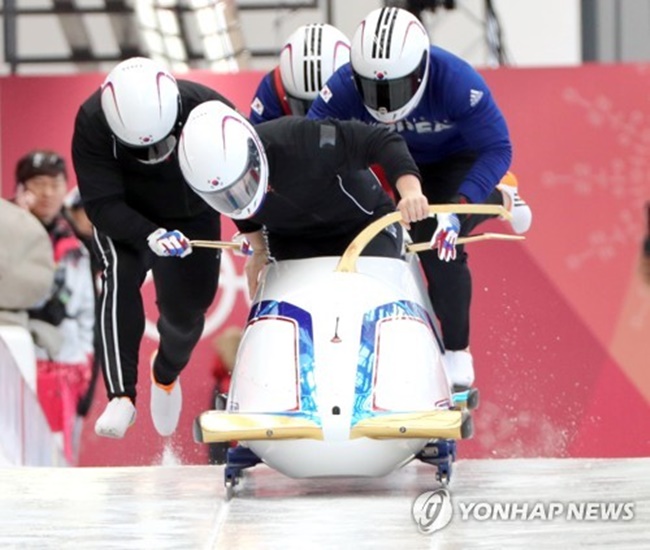 The team comprised of Won Yun-jong, Seo Young-woo, Kim Dong-hyun and Jun Jung-lin completed their first two official training sessions at Olympic Sliding Centre in PyeongChang, Gangwon Province. The South Koreans finished 14th among 29 teams in their first training run with a time of 49.78 seconds but later marked the fourth best time at 49.53.

Won, the pilot, said he and Seo will forget about their performance in the two-man bobsleigh competition. With home field advantage, the two were looking for a medal but had to settle for sixth place.

“I’m preparing for the four-man bobsleigh with a fresh mindset,” Won said. “I will reset my mentality and want to compete in the four-man race until the end.”

The four-man bobsleigh competition will have a total of four heats, and the team with the fastest aggregate time will get the gold medal. The winner will be determined Sunday, the last day of the PyeongChang Winter Olympics.

Seo, a brakeman, said he doesn’t want to have regrets in his final competition at the Winter Games at home.

“Our team atmosphere is so good, and we want to see the fruit of our hard work,” he said. “We’ll go for a medal, but what’s important is not to finish with regrets.”

The four-man bobsleigh competition wasn’t an event that many South Koreans expected a medal. But the bobsledders said it’s possible unless they give up.

“I’m more desperate than the previous two Olympics because we’re competing in our home county,” said Kim, who is in his third Winter Games.”We really worked hard and will give our best until the final moment because you never know what’s going to happen.”

“I think our time in the third and fourth training runs will be better,” he said. “We know people had expectations for the two-man bobsleigh, but the four-man team also has prepared hard. I hope many people can cheer for us.”