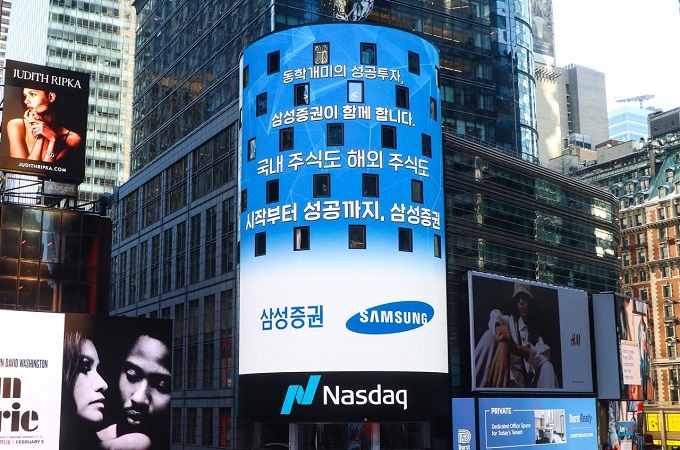 This photo, provided by Samsung Securities Co. on Feb. 7, 2021, shows an advertisement promoting the brokerage house on a Times Square billboard in New York on Feb. 4.

SEOUL, Feb. 9 (Korea Bizwire) — South Korea’s overall advertising expenditure inched down in 2020 due to the coronavirus pandemic, but the digital ad market expanded at a double-digit rate, a report showed Tuesday.

Advertising expenses in Asia’s fourth-largest economy amounted to 11.99 trillion won (US$10.7 billion) last year, down 0.8 percent from a year earlier, according to the report from Cheil Worldwide Inc.

The country’s leading advertising agency attributed last year’s sluggish market growth to the COVID-19 outbreak that made a big dent in corporate sales and advertising.

In the wake of the pandemic, the local digital ad market, including PC and mobile advertisements, swelled 13 percent on-year to 5.71 trillion won.

The share of the digital advertising market thus soared to an all-time high of 47.6 percent last year.

In contrast, expenses for broadcasting and print media ads suffered declines, with the market for billboards and other out-of-home ads registering a 27.2-percent on-year tumble.

In particular, the digital ad market is projected to exceed the 6 trillion won mark, with its market share nearing 50 percent, it added.