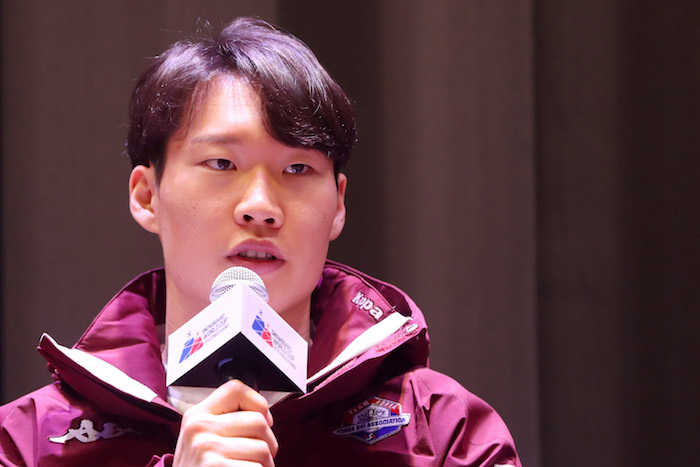 PYEONGCHANG, Feb. 8 (Korea Bizwire) — South Korean alpine snowboarder Lee Sang-ho, who won a silver medal at the 2018 PyeongChang Winter Olympics, said Friday his next target is to win a gold medal at the Beijing Winter Games.

Lee became the first South Korean to win an Olympic medal in snow sports after claiming silver in the parallel giant slalom at the PyeongChang Games in February 2018. The 23-year-old said he wants to achieve better results at the upcoming Winter Olympics.

“Although I couldn’t win a gold medal at the PyeongChang Olympics, I was still happy to win silver,” Lee said at a press conference in PyeongChang, Gangwon Province. “For the 2022 Winter Olympics in Beijing, I’m aiming for a gold medal.”

Following his historic result at PyeongChang 2018, Phoenix Snow Park, a ski resort that hosted alpine snowboard events, named a slope after him.

On that slope, Lee will compete at the International Ski Federation (FIS) World Cup from Feb. 16 to 17.

“I’ve already competed on that slope for a local competition,” he said. “I couldn’t describe that feeling, but I was happy. It’s an honor to race on the slope named after myself, I’ll do my best to collect a good result.”

Lee is having a tough season after the Olympics. In his last five World Cups, he only managed to reach the round of 16 once.

“It’s true that I’m struggling this season,” he said. “Honestly, it’s difficult to find the same motivation that I had for the Olympics.”

Lee said he also changed his gears after the Olympics and that may have affected his slump this season.

“You can’t always get a good result,” he said. “But I’m sure there will be an opportunity for a rebound, so I will keep working hard.”