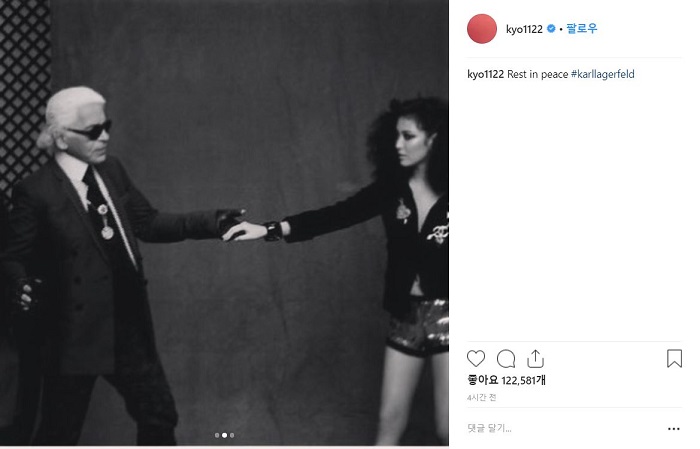 SEOUL, Feb. 21 (Korea Bizwire) — The news of the recent death of Karl Lagerfeld, Chanel’s iconic creative director, is bringing South Korean celebrities to pay tribute to a man who was one of the most prolific designers of the century.

Song Hye-kyo, a South Korean actress, posted a black-and-white photo of Karl Lagerfeld on her Instagram account on Wednesday. “Rest in peace,” she said in a comment.

Song worked with Lagerfeld in 2012 when she was modelling for ‘Little Black Jacket’, the designer’s photographic exhibition.

Han Hye-jin, a South Korean model, also posted a photo of Lagerfeld on her Instagram account, saying she “could not forget the moment when she first took to the stage for Lagerfeld in Paris in 2006.”

“As a fan, a model, and a woman, I am very grateful to have worked with him,” she added. “It will be difficult to imagine Fendi and Chanel without Karl Lagerfeld.”

South Korean model and Chanel global ambassador Soo Joo Park, celebrity stylist Han Hye-yeon and others have also posted pictures of Lagerfeld on their Instagram accounts in remembrance of him.