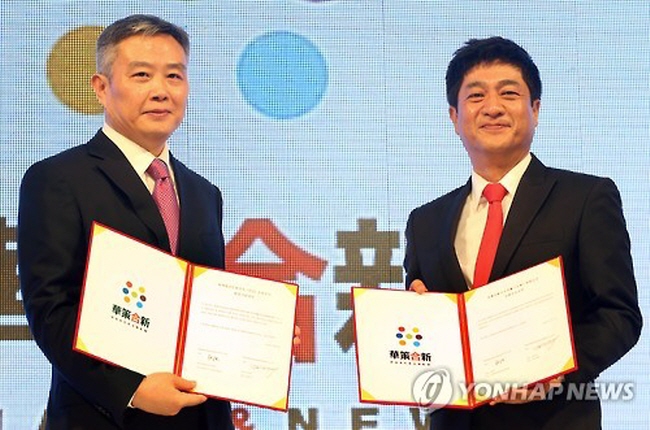 Next Entertainment World (NEW) and China’s Huace Media Group announced the creation of “Huace & NEW” in a ceremony at a Busan hotel on the sidelines of the Busan International Film Festival.’ (image: Yonhap)

South Korea’s leading film investor-distributor Next Entertainment World (NEW) and China’s Huace Media Group announced the creation of “Huace & NEW” in a ceremony at a Busan hotel on the sidelines of the Busan International Film Festival.’

The venture firm announced “The Witch,” “Beauty Inside and “The Phone” as their first three projects at the ceremony as well.

“This will serve as a foundation for mustering know-how and the wisdom of the two companies, present the best content in the fast-growing Chinese market, and promote the diversity of cultural industries of Asia and elsewhere in the world,” Kim said in his speech at the ceremony.

“The establishment of Huace & NEW is also meaningful to Huace Group as an important step in its globalization strategy,” Fu said in a video message. “Huace & New will produce good works, combining resources and facilitating cooperation among creative artists.”

The two sides plan to produce two different films tailored to audiences’ tastes in each country from the same source material, escaping from the current method of simply producing Chinese remakes of Korean films.

“The Witch,” a film based on Kang Full’s hit webtoon series, is the first time intellectual property has been acquired from the beginning with the intent of making two films for two different territories in mind, NEW said.

Yoo said the Chinese-language version of “The Witch” will likely be out in the first half of next year.

“We will make it a super-hit film far more successful than ‘A Wedding Invitation’ or ’20, Once Again!’,” he said.