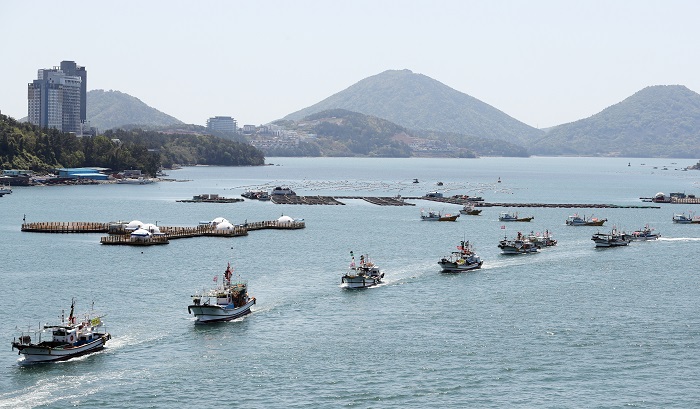 South Korean fishermen stage a maritime demonstration in the sea off Yeosu, southwestern South Korea, on April 19, 2021, to protest against Japan’s decision to release contaminated water into the ocean. (Yonhap)

In Yeosu, southwestern South Korea, about 150 fishing vessels were mobilized for a massive maritime demonstration, as local fishermen vented their anger against Japan’s planned wastewater discharge that they insist will endanger their livelihoods.

In the southern sea off Geoje, about 450 kilometers southeast of Seoul, hundreds of fishermen aboard about 50 vessels conducted a separate maritime demonstration for hours.

Those ships sailed with flags marked with X, which symbolizes a nuclear power plant, or X-mark skulls and banners carrying slogans decrying the planned discharge of contaminated water.

Ahead of the maritime demonstrations, the fishermen in Yeosu and Geoje held separate protest rallies, expressing fears that the local fisheries industry will suffer a fatal blow due to consumers’ concern about the possibility of radioactive contamination of seafood.

The fishermen then demanded that the Japanese government immediately retract its decision to release contaminated water into the sea.

“If Japan releases radioactive water, there is no guarantee that our people will not eat radioactive fish. I can hardly control my seething anger,” a fisherman in Geoje said.

Geoje Mayor Byun Gwang-yong also said Japan’s planned release of contaminated water is feared to severely harm the livelihoods of some 10,000 fishermen in the city. 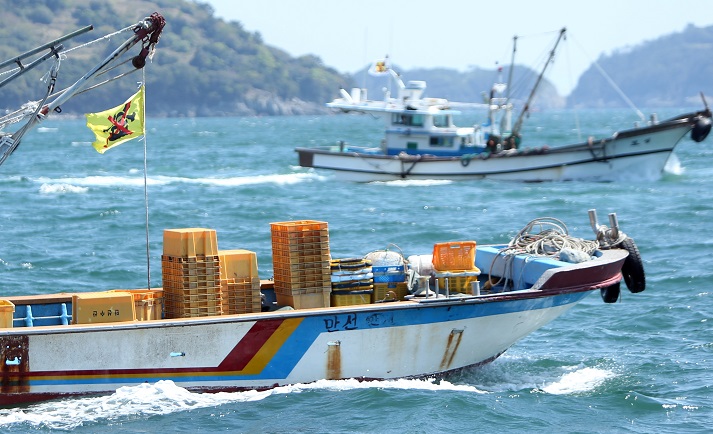 Early last week, Tokyo announced its decision to start releasing massive amounts of radioactive water, which has been stored in tanks at the wrecked Fukushima nuclear plant, in two years.

Since then, a growing number of civic groups and local government heads in South Korea have held protest rallies or issued statements against the Japanese move.

In Seoul, the National YWCA of Korea, one of the nation’s largest women’s organizations, on Monday urged the Japanese government to immediately scrap its plan to dump contaminated water into the sea.

During a news conference in front of the Japanese Embassy in the capital, YWCA condemned Tokyo’s planned discharge of radioactive water as a criminal act that will eventually put all of mankind to death.

“Japan has chosen a cheap and reckless method, though Korea and neighboring countries have proposed various methods to help reduce the continuous damage from nuclear accidents,” the group said.

“The planned release of radioactive water will not only threaten the lives of Japan and its neighboring countries but also will be a criminal act that will drive all of mankind to death through generations,” the organization said.

YWCA then vowed to respond strongly through cooperation with citizens at home and the international community, including neighboring countries, until the Japanese government revokes its wrong decision. 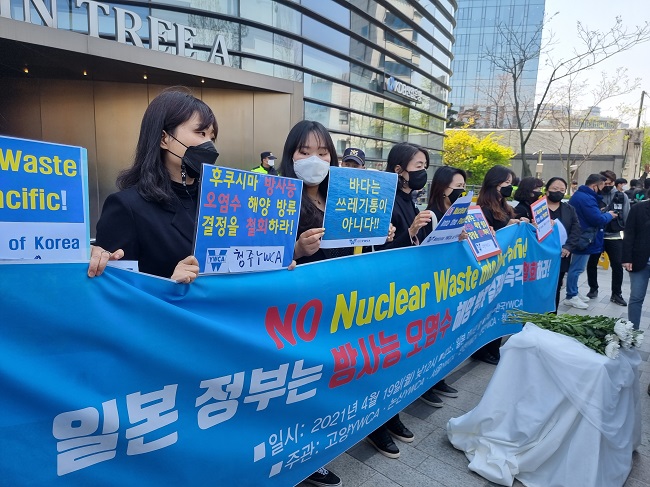 Members of the National YWCA of Korea hold a news conference in front of the Japanese Embassy in Seoul on April 19, 2021, to demand Japan immediately scrap its decision to discharge radioactive water into the sea. (Yonhap)

A group of progressive university students, who have staged a sit-in protest in front of the Japanese Embassy for four days in a row, said 30 students plan to have their heads shaved Tuesday afternoon in protest against Japan.

During the closed-door meeting in the governor’s office, Won expressed concern that Japan’s planned discharge of contaminated water could pose a threat to the lives and safety of Jeju residents, as well as to the marine ecosystem.

The governor then emphasized transparent disclosure and sharing of information and sincerity between the two nations, while the Japanese diplomat promised to deliver the requests from Jeju to Tokyo.