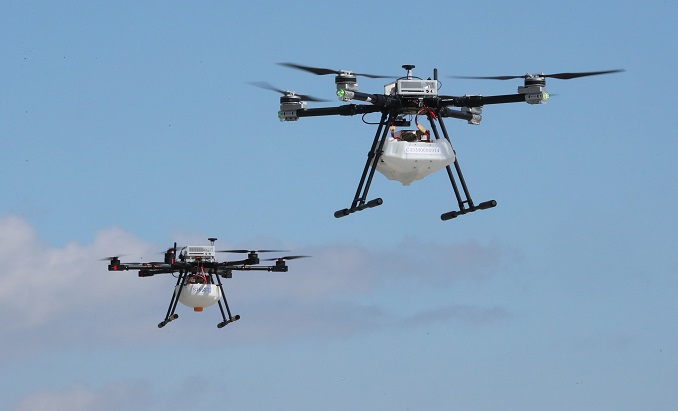 A demonstration of a hydrogen fuel cell drone, developed by Hogreen Air, takes place at a drone park in Gwangju, 330 kilometers south of Seoul, on Oct. 14, 2021. (Yonhap)

GWANGJU, Oct. 15 (Korea Bizwire) — A South Korean drone company has succeeded in remotely controlling a drone thousands of kilometers away.

Local drone manufacturer Hogreen Air on Thursday succeeded in remotely controlling two 5G hydrogen fuel cell drones in at a drone park in the southern city of Gwangju from a 9,042-kilometer distance in Silicon Valley.

The remote control system used for the demonstration was based on a 5G/LTE mobile network that resolves the instability caused by previous RF networks.

The drones can be controlled from anywhere in the world as long as they are connected to a mobile network.

The drones also use fuel cells powered by liquified hydrogen, which is 800 times denser than hydrogen gas.

Unlike other drones that can fly no longer than 10 to 30 minutes using lithium batteries, the Hogreen Air drones can fly longer than 12 hours.