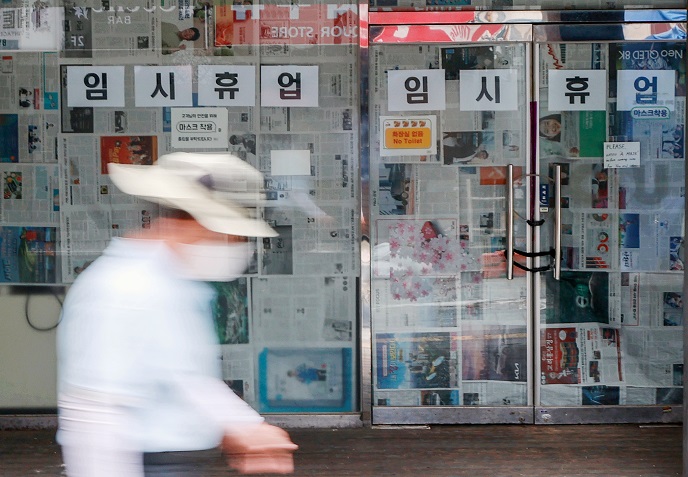 This file photo, taken Sept. 6, 2021, shows a sign announcing a temporary closure over COVID-19 at a convenience store in Seoul’s nightlife district of Itaewon. (Yonhap)

SEOUL, Oct. 7 (Korea Bizwire) — The South Korean economy is facing increasing downside risks as the uptick in COVID-19 cases is delaying the recovery of private spending amid heightened uncertainty about the global economic recovery, a state-run think tank said Thursday.

Asia’s fourth-largest economy is on a recovery track driven by solid exports, but slumps in the face-to-face service sector are deteriorating during the current spike in coroanvirus cases, according to a monthly economic assessment report by the Korea Development Institute (KDI).

“Korea’s economic recovery is slowing on the contraction in the face-to-face service industry, and downside risks are running high on growing global uncertainty,” the English-language report showed.

South Korea is grappling with another wave of the pandemic as its daily new cases have topped 1,000 for more than three months.

Since July 12, the greater Seoul area, home to half of the country’s population of 52 million, has been under Level 4 measures, which include business restrictions and a ban on private gatherings of three or more people after 6 p.m.

South Korea’s industrial output, retail sales and investment declined in August from the previous month in the latest sign that economic recovery momentum slowed amid the fourth wave of the pandemic.

Retail sales, a gauge of private spending, declined for the second straight month in August.

But exports, which account for half of the economy, remained solid on the back of strong demand for chips and autos. Overseas shipments rose 16.7 percent on-year to a record high of $55.8 billion in September, extending their gains to the 11th straight month.

KDI said the negative fallout from the toughest-ever virus curbs will likely decline after September due mainly to the government’s consumption stimulus program and the vaccine rollout.

The Bank of Korea forecast the Korean economy will grow 4 percent this year. The government expected economic growth of 4.2 percent for 2021.