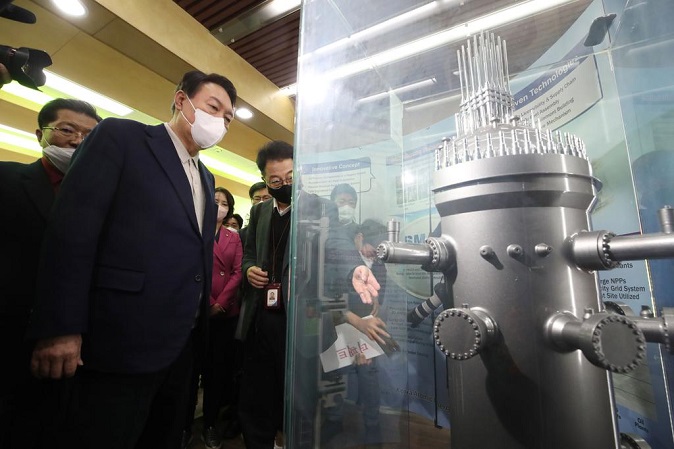 Yoon Seok-youl (L), then-presidential candidate of the main opposition People Power Party, listens to explanations from a researcher about a small modular reactor (SMR) during a visit to the Korea Atomic Energy Research Institute in Daejeon, 164 kilometers south of Seoul, on Nov. 29, 2021. (Yonhap)

SK Inc., the holding company of conglomerate SK Group, has been considering investing in SMRs with the group’s energy and chemical affiliate SK Innovation Co. since the middle of last year, industry sources said.

The subject and size of investment, however, remains to be determined.

Doosan Enerbility also took charge of manufacturing and supplying initial equipment needed for the construction of the NuScale Power SMR, aiming for commercial operation by 2029.

Last September, the company signed a contract with X-energy, an American high-temp gas cooled SMR developer, for the design of a primary plant.

The company has also signed a memorandum of understanding with Seaborg Technologies, an Danish MSR developer, to develop marine propulsion systems and floating nuclear power plants.