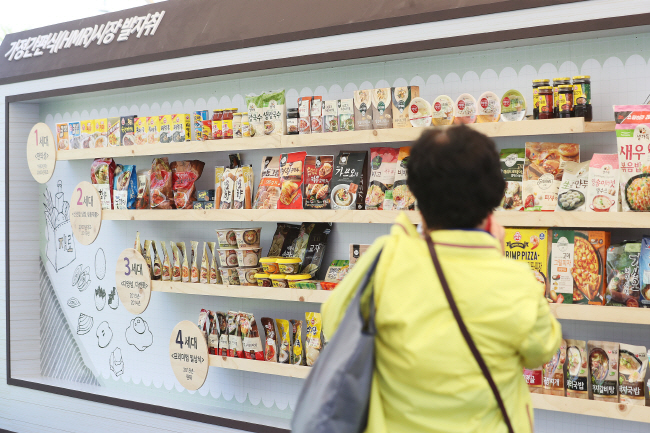 A worldwide trend of convenient cooking, and wide interest among foreigners on Korea’s ‘meokbang,’ or online eating broadcasts, may give rise to HMR as the new blue ocean for exports. (Yonhap)

SEOUL, Aug. 20 (Korea Bizwire) — The South Korean food industry is entering the global home meal replacement (HMR) market, based on the confidence supported by its growing presence in the South Korean market as well as its diversifying products.

Rising competition in the domestic market as well as shrinking food consumption are also factors that are leading the food industry overseas.

According to the Ministry of Agriculture, Food and Rural Affairs, shipments of Korean-made HMR have increased by 70 percent over the last five years, reaching 3 trillion won (US$2.5 billion).

Exports have also increased by 27.8 percent in just four years, reaching US$466 million.

A worldwide trend of convenient cooking, and wide interest among foreigners on Korea’s ‘meokbang,’ or online eating broadcasts, may give rise to HMR as the new blue ocean for exports.

As such, the food industry is coming up with various export strategies tailored to the policies and cultures of various countries.

HMRs, which used to focus on instant noodles and rice, are expanding to cover a variety of soup dishes and pastas. Export destinations are also going through a dramatic shift.

Chang Tuh Corp. is an HMR manufacturer that specializes in Korean soup that E-Mart America purchased in March last year. The company will now work as Shinsegae Food’s manufacturing hub in the Americas.

CJ has a strong presence in China’s instant rice market with Hetbahn, the company’s signature cooked rice, and plans to make it into a brand that’s worth 100 billion won in value within the next three years.

CJ’s Hetbahn Cupbahn is now being exported to wider regions across the world, including the United States and Europe. Hetbahn Cupbahn sales have increased by 40 percent over the last 12 months in the U.S. market only.

Daesang Corp. sells Korean cold noodles, pasta, and other HMR products in China. The company opened up a pop-up store in Hong Kong last February to strengthen its presence in the Chinese market.