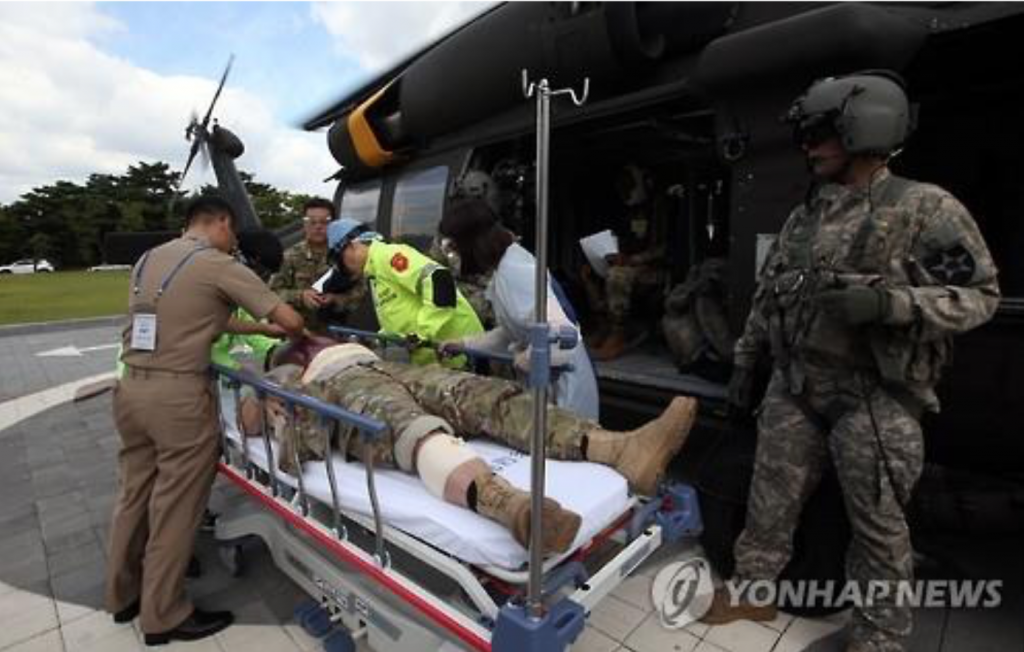 An injured U.S. soldier is carried on a stretcher to Ajou University Hospital in the city of Suwon, just south of Seoul, on Aug. 30, 2016, after being evacuated by a UH-60M Black Hawk utility helicopter. (image: Yonhap)

SUWON, South Korea, Aug. 31 (Korea Bizwire) – A mock treatment drill on Tuesday at Ajou University Hospital in Suwon, just south of Seoul, tested the preparedness of staff and emergency responders should U.S. soldiers be injured by a North Korean attack.

Staff of the hospital’s emergency room carried six injured U.S. soldiers on carts to its center for serious external injuries after a UH-60M Black Hawk utility helicopter evacuated them to the hospital’s heliport. The two-day drill was conduced as part of a South Korea-U.S. joint military exercise.

The annual Ulchi Freedom Guardian exercise, which runs through Friday, is aimed at enhancing readiness, protecting the region and maintaining stability on the Korean Peninsula.

Classified into three levels of injuries — green, yellow and red — the patients with bandages put around their head, waist or arms were whisked to operating or intensive care rooms.

The scenario on Tuesday was of U.S. soldiers being wounded by a North Korean artillery attack near South Korea’s border with the North and subsequently evacuated to the hospital for treatment.

The drill was spearheaded by Lee Kug-jong, a surgeon at the hospital who won fame for his treatment of Seok Hae-kyun, the former captain of the freighter Samho Jewelry. Seok was shot several times by pirates during the Navy’s 2011 operation to rescue the captured freighter.

During the treatment drill, 100 medical staff from Ajou and the Navy were mobilized.

Around 1:20 p.m., another UH-60M Black Hawk utility helicopter with a second batch of six mock injured U.S. soldiers arrived at the hospital.

Another 20 U.S. soldiers with simulated slight injuries reached the hospital in an ambulance after arriving at Suwon Station by train.

The hospital’s five-member staff, including Lee, will board a helicopter Wednesday to move some seriously injured soldiers to a South Korean transport ship, the Dokdo, anchored near the southeastern coastal city of Busan before handing them to the U.S. Army side.

“When a real war happens, a large number of American and South Korean soldiers will be injured,” Lee said. “Today’s drill is tantamount to a wartime situation.”