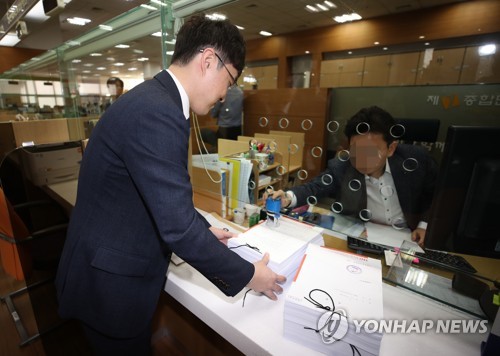 An official from Hannuri Law hands over documents related to its lawsuit against Apple Inc. and its local branch to the Seoul Central District Court in the nation’s capital on March 30, 2018. (image: Yonhap)

Hannuri Law said it filed the suit at the Seoul Central District Court on behalf of 63,767 iPhone users. It marked the largest number of participants for a single lawsuit.

Local consumers have been demanding compensation from Apple after the company acknowledged last year that its operating software updates intentionally slowed down the operating speed of older iPhone models.

While Apple claimed that the measure was necessary to prevent devices from suddenly shutting down, local consumers claim that the company should still have notified users of the matter before the decision was taken.

The law firm said while Apple was aware that the speed of iPhones slowed down through the problematic iOS updates, it did not notify users to hide the flaws in the battery, to prevent consumers from seeking other options and to promote sales of iPhones.