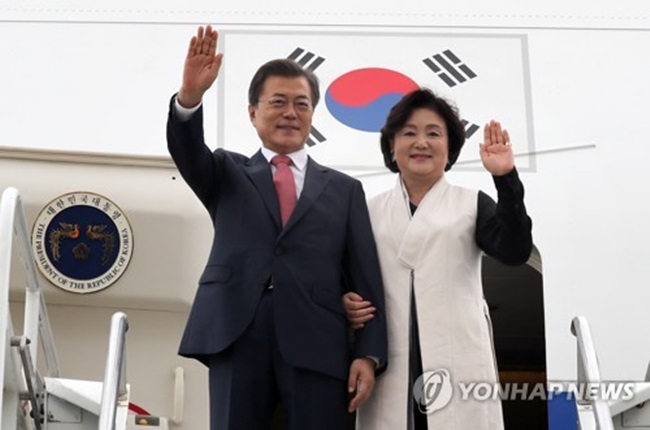 South Korean President Moon Jae-in (L) and his wife, Kim Jung-sook, wave at a group of officials and people welcoming them to New York on Sept. 18, 2017. The new South Korean leader is on a four-day trip to the United States for the U.N. General Assembly. (Image: Yonhap)

NEW YORK, Sept. 19 (Yonhap) – South Korean President Moon Jae-in is set for a series of bilateral talks with other global leaders in New York on Tuesday, following his participation in the opening of the U.N. General Assembly.

The new South Korean leader will begin the second day of his four-day visit here with a meeting with International Olympic Committee (IOC) chief Thomas Bach, in which he is widely expected to call for stepping up of joint efforts between his country and the IOC to ensure a successful 2018 Winter Olympic Games in South Korea’s PyeongChang.

Moon will make his debut in the U.N. arena, joining the leaders of over 120 countries, including U.S. President Donald Trump, at a lunch to be hosted by U.N. Secretary-General Antonio Guterres.

A series of other bilateral summits await Moon, who took office in May, according to his presidential office Cheong Wa Dae.

He will hold talks with his Czech counterpart Milos Zeman, which will be followed by a summit with British Prime Minister Theresa May.

A one-on-one meeting with Senegalese President Macky Sall is scheduled to be held later Tuesday, after which Moon will join a summit of key nations on climate change.

Wrapping up his second day in New York, the South Korean president will attend a dinner hosted by U.S. think tank the Atlantic Council, where he will receive the Global Citizen Award, becoming one of only three to win the annual prize this year, according to Cheong Wa Dae.