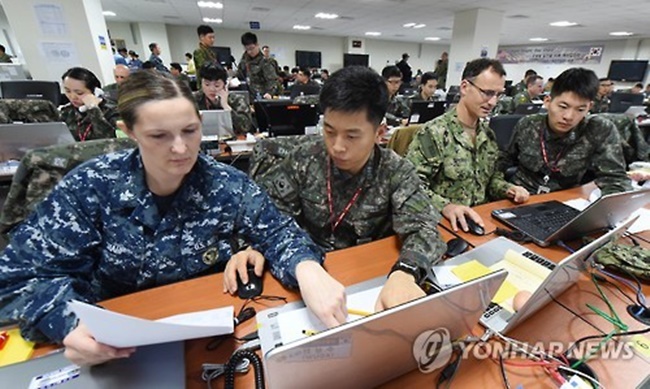 Many expect the two sides to open the training not long after the sports events. Still, some North Korea watchers raised doubts, citing the rare mood of reconciliation between the two Koreas. (Image: ROK Armed Forces)

The allies will hold the Key Resolve (KR) and the Ulchi Freedom Guardian (UFG) exercises in order to develop their so-called 4D Operational Concept to detect, disrupt, destroy and defend against North Korean missile threats, the Ministry of National Defense said in a report to the National Assembly.

But it did not mention the Foal Eagle (FE) field training and the exact schedule for the KR and the UFG, which is staged in the summer.

The allies used to begin the KR and the FE in Korea in late February or early March.

This year, they agreed to postpone the annual maneuvers until after the end of the PyeongChang Winter Olympics and Paralympics in mid-March.

Many expect the two sides to open the training not long after the sports events. Still, some North Korea watchers raised doubts, citing the rare mood of reconciliation between the two Koreas.

The South’s President Moon Jae-in recently received an invitation from the North’s leader Kim Jong-un to visit Pyongyang. The South hopes to maintain the momentum created by the North’s participation in the PyeongChang games.

The ministry added that, in the meantime, South Korea and the U.S. will continue to work together to upgrade their tailored deterrence strategy (TDS) in 2018.

Another main task is to prepare for the Washington-to-Seoul transition of wartime operational control of South Korea’s armed forces, it said.

The allies have a deal on a “conditions-based” OPCON transition amid consultations on the future combined command structure that would replace the Combined Forces Command (CFC) currently led by a four-star American Army general with a three-star South Korean general serving as deputy commander.

The ministry also said it will explore ways to implement a win-win partnership of the Trump administration’s Indo-Pacific strategy and South Korea’s defense policy.

As part of a defense reform drive toward a nimble and more powerful military, the Army plans to create “dronebot” combat units at its envisioned ground operation command and frontline divisions.

The Navy will launch a new expeditionary fleet headed by a KDX-III Aegis destroyer, in addition to the two existing ones.The Marine Corps is pushing for the establishment of its own aviation unit in 2021.

The Air Force will introduce two RQ-4 Global Hawk unmanned aerial vehicles (UAVs) in 2018 under a 2014 contract with the U.S., with two more to arrive next year.