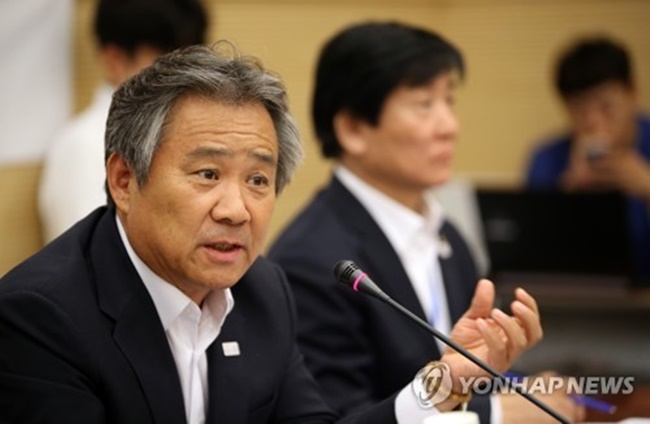 Lee Kee-heung, president of the Korean Sport & Olympic Committee, speaks at a press conference at the Jincheon National Training in Center in Jincheon, North Chungcheong Province, on July 6, 2017. (Image: Yonhap)

JINCHEON, South Korea, July 6 (Korea Bizwire) – South Korea’s Olympic body chief said Thursday it is too early to talk about a unified team or joint march between the two Koreas at the 2018 Winter Games because North Korea has yet to confirm its participation.

Lee Kee-heung, president of the Korean Sport & Olympic Committee (KSOC) acknowledged during a press meeting that sports exchanges are instrumental to the reconciliation of the two Koreas.

“But sports exchanges and a unified team are not things that we can do on our own,” Lee told reporters at the Jincheon National Training in Center in Jincheon, North Chungcheong Province.

South Korea has been pushing for sports diplomacy to ease tensions on the Korean Peninsula. President Moon Jae-in told International Olympic Committee (IOC) President Thomas Bach on Monday that he would like to see North Korea at the PyeongChang Games since its presence can contribute to peace in the region.

Lee said the PyeongChang Games will be remembered as “peace Olympics” if North Korea takes part in the first Winter Games in South Korea.

“Considering the current situation, we don’t know how many foreigners will visit PyeongChang next year,” he said. “But if North Korea joins the PyeongChang Olympics, it meets the idea of peace Olympics, so many people will visit South Korea.”The 62-year-old said even if a united Korean team is formed, such as in women’s ice hockey, he will try to minimize losses of South Korean athletes who will have to give up their positions to the North Koreans.

Lee, who was elected to the KSOC chief last year, is currently looking for a seat on the IOC after he submitted his candidacy documents to the IOC’s Members Election Commission on June 16. He said the sports ministry recommended that he run for an IOC member post.

“While discussing PyeongChang Olympic issues with the sports ministry and the organizing committee, we found common ground that South Korea needs a person who can directly talk with the IOC,” he said. “The ministry proposed that I submit my candidacy, so I did it as the head of the national Olympic body.”

During its board of directors meeting last month, KSOC board members sought to nominate Lee as the candidate. Lee then said it was premature to decide on the candidate without first consulting with former IOC members from the country and conducting careful reviews of all potential candidates. Barely a week later, Lee, however, ended up filing for the candidacy, raising controversy over his self-nomination.

Lee claimed there was no problem with him earning the candidacy, as he talked with various sports officials and former IOC members before making the decision.

“I was told by the former IOC members and the former KSOC chiefs that whether I win IOC membership or not, I should quickly submit the candidacy,” he said. “I took all steps properly and I didn’t nominate myself arbitrarily.”

The IOC Executive Board later this month will finalize the list of candidates who will be put to a vote during the IOC Session beginning Sept. 13 in Lima, Peru. The successful candidate must win the majority of the votes cast.

South Korea currently has two members on the IOC. Samsung Electronics Chairman Lee Kun-hee has been an IOC member since 1996, but he has been hospitalized since May 2014 and remains unable to function in any IOC capacity.

That leaves former Olympic table tennis gold medalist Ryu Seung-min as the only active IOC member from South Korea. He was elected to the IOC’s Athletes Commission last year. Members of the commission enjoy the same rights as other IOC members, but they serve one eight-year term. IOC members are also elected for eight years and their mandates can be renewed.

Lee has previously led the South Korean governing bodies for canoe and swimming. He was the chef de mission for the 2010 Guangzhou Asian Games and the 2012 London Olympics.