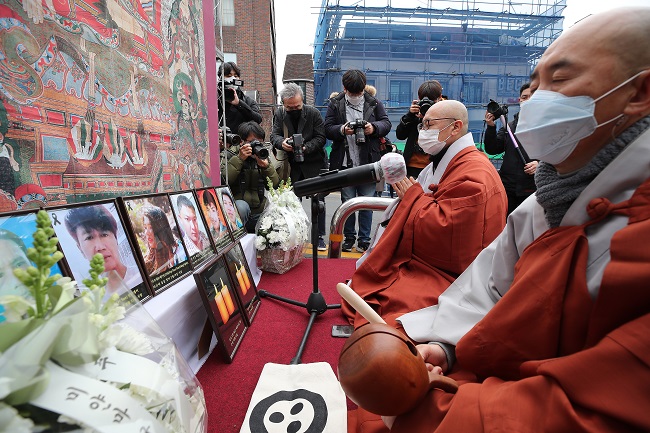 This Feb. 25, 2021, photo shows members of the Jogye Order, the biggest Buddhist sect in South Korea, and members of a coalition of Myanmarese residing here holding a joint memorial service in front of the Myanmarese Embassy in central Seoul to commemorate the sacrifice of civilians who died in protest against the recent coup in Myanmar. (Yonhap)

SEOUL, Feb. 27 (Korea Bizwire) — The National Assembly of South Korea has passed a parliamentary resolution denouncing the recent military coup in Myanmar, calling it a “serious defiance of democracy.”

The assembly also expressed support for the Myanmarese people, who have led a near monthlong movement protesting the coup d’etat and demanding the restoration of democracy.

“(The assembly) calls upon Myanmar’s military to observe fundamental human rights, including freedom of speech and personal freedom, and immediately suspend the use of violence against innocent citizens,” the resolution said.

On Feb. 1, Myanmar’s military authorities detained leaders of Aung San Suu Kyi’s National League for Democracy party, including the state counselor herself, doubling down on their claims of fraud in November elections in which her party won a landslide victory.

A state of emergency has also been declared while internet and flights have been cut off, throwing the country back into full military rule.

The resolution also voiced deep concerns over the safety and freedom of some 3,500 South Koreans currently residing in Myanmar and called for measures to ensure their safety.