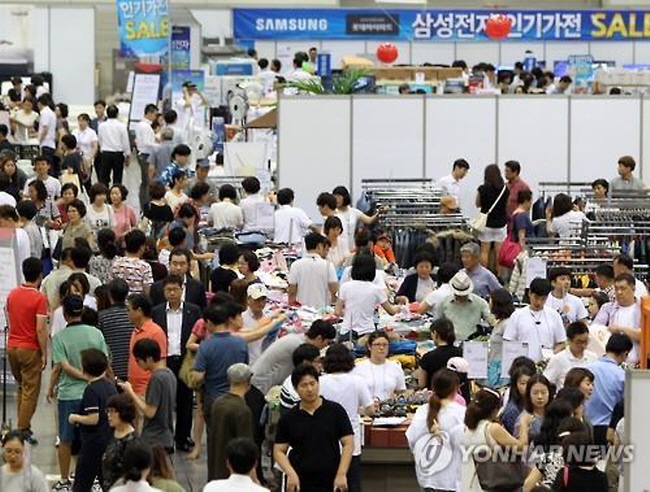 Lotte Department Store holds a special sale on July 23, 2015, at KINTEX, an exhibition center outside of Seoul, as part of efforts to boost consumption. (Yonhap)

Lotte Department Store, the country’s biggest department store chain, opened the “Lotte Black Super Show” at KINTEX, a suburban exhibition center outside of Seoul, on Thursday to slim down its stock of products.

Sales in the first three days of the four-day event totaled 8.5 billion won (US$7.3 million), bigger than its initial target of 6 billion won, as more than 600,000 people visited the venue, according to Lotte Department Store.’

Hyundai Department Store is also running sale events for luxury brands at its key branches, while Shinsegae Department Store has rescheduled its annual sale to an earlier period to target shoppers going on summer holidays or those shopping directly from overseas retailers.

Hypermarkets are also in the game. E-mart, the country’s top discount chain, is selling fashion items at prices that are up to 60 percent lower than the original price, after suffering an 18.2 percent slump in the product category following the MERS outbreak.

Duty-free shops that were severely hit by the respiratory disease have also launched sales and promotions to lure back both domestic and foreign shoppers.

Market leader Lotte Duty Free is selling luxury handbags and accessories of some 30 brands at reduced prices, while its smaller rival, Shilla Duty Free, is giving out special gift packages to Chinese shoppers, which include transportation cards, Wi-Fi coupons and selfie sticks. The company is also paying taxi fees for Chinese tourists who visit its Seoul store, according to Shilla Duty Free.

The move comes as domestic demand still remains sluggish even as the country is nearing the official end of the MERS outbreak that has claimed 36 lives and pummeled private spending here.

The South Korean economy expanded 0.3 percent in the April-June period, sharply slowing from a 0.8 percent on-quarter growth in the first quarter, as consumers refrained from visiting public venues and foreigners canceled their visits on fears of contracting MERS.

In June, the central bank’s index measuring consumer sentiment fell below the benchmark level for the first time in more than two years, reflecting widespread concern over the respiratory disease. The index eked out a 1-point gain in July.

Bank of Korea Gov. Lee Ju-yeol noted that while domestic demand is slowly making a recovery, the decline in foreign tourists is unlikely to turn higher for the time being, adding to concerns on feeble growth.