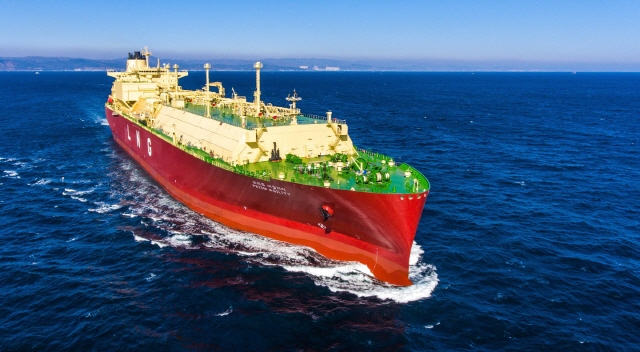 This photo provided by Hyundai Heavy Industries Co. shows a LNG carrier built by the shipbuilder.

SEOUL, July 9 (Korea Bizwire) — New orders won by South Korea’s shipbuilders tumbled 67 percent in the first half of the year from a year ago as the coronavirus pandemic ravaged demand, industry data showed Thursday.

In the first half of this year, South Korean shipbuilders’ new orders came to 1.18 million compensated gross tons (CGTs), compared with 3.58 million CGTs a year ago, according to data provided by global market researcher Clarkson Research Service.

Globally, new shipbuilding orders fell 57 percent to 5.75 million CGTs or 269 ships in the first half from 13.02 million CGTs a year earlier, the lowest since 1996, when the market tracker began to compile related data.

“The sluggish new orders of the local leading shipbuilders were ascribed to a rise in new orders for Chinese rivals in China and a sharp fall in new orders of liquefied natural gas (LNG) carriers, which South Korean shipbuilders have an edge on their global rivals,” Chung Dong-ik, an analyst at KB Securities Co., said in a report.

Korea Shipbuilding & Offshore Engineering Co. said its three shipbuilding subsidiaries bagged a combined US$2 billion worth of new orders to build a total of 33 ships in the January-June period, down 44 percent from $3.6 billion for 47 ships a year earlier.

The first-half new orders met a mere 11.4 percent of their annual order targets of $17.5 billion.

Samsung Heavy Industries posted $500 million, or five ships, in new orders in the first half, falling a whopping 84.4 percent compared with $3.2 billion a year ago.

Daewoo Shipbuilding obtained 20 percent of its annual order target of $7.21 billion during the six-month period with just $1.43 billion worth of orders to build six ships, which was down 48 percent from $2.77 billion or 16 ships.

Market watchers predicted South Korean shipbuilders to see a rise in new orders on the back of orders of LNG carriers from Russia and Mozambique late this year.

“Samsung Heavy Industries and Korea Shipbuilding & Offshore Engineering will benefit from orders of LNG carriers from projects which are being pushed in Russia and Mozambique, improving their earnings in late 2020,” Kim Hong-gyun, an analyst at DB Financial Investment Co., said in a report.

South Korean leading shipbuilders– three subsidiaries of Korea Shipbuilding & Offshore Engineering, Daewoo Shipbuilding & Marine Engineering and Samsung Heavy Industries– also are struggling with a dearth of new orders for offshore facilities in the first half due to a fall in oil prices.