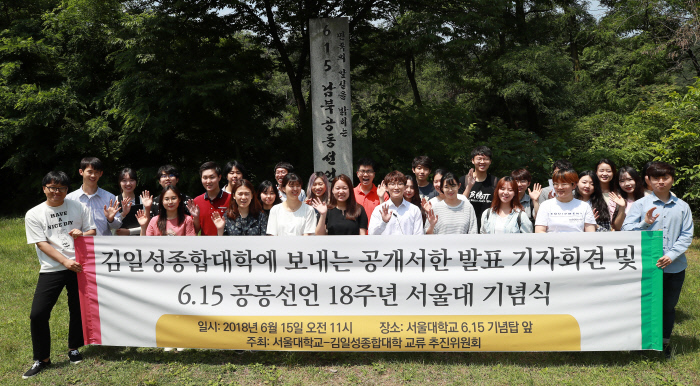 Members of a committee at Seoul National University seeking inter-Korean exchanges attend a ceremony at the school in Seoul on June 15, 2018, to mark to mark the 18th anniversary of the historic first inter-Korean summit in 2000. (image: Yonhap)

SEOUL, Jun. 15 (Korea Bizwire) — A student committee at Seoul National University (SNU) on Friday proposed holding talks with its counterpart at Kim Il Sung University, North Korea’s most prestigious school of higher learning, in Pyongyang this year to promote exchanges between students of the two schools.

The committee seeking inter-Korean exchanges in cooperation with the university’s general student council said during a ceremony at the school to mark the 18th anniversary of the historic first inter-Korean summit in 2000 that it emailed the proposal to the student committee of the North Korean school earlier in the day.

The proposed meeting would be the first time universities from the two Koreas have had exchanges or cooperated since the division of the Korean Peninsula in 1948.

In 1988, a candidate running in the election to pick the chief of the SNU general student council proposed holding talks with students of the North Korean school for a joint athletics meet. The North Korean side accepted the proposal but inter-Korean tension and the political situation at the time caused the project to fall through.

Friday’s proposal came after the SNU committee filed a request with the Unification Ministry on May 24 to contact the North Korean students and the ministry gave a nod to the request on Tuesday.

Warming inter-Korean ties this year have fueled prospects for the first-ever exchanges between students of the two Koreas’ universities.

Leaders of South and North Korea agreed to a set of measures to improve inter-Korean ties and ease military tensions in the April 27 Panmunjom Declaration. The agreement also called for efforts to promote various exchanges and contacts so as to enhance inter-Korean reconciliation and unity.

The first-ever summit between the United States and North Korea, which was held in Singapore on Tuesday, also brightened the outlook for peace and stability on the peninsula, which is expected to help the student groups of the two Koreas implement their exchange programs.

In its proposed meeting with the North’s student committee, the committee plans to discuss ways to carry out various exchange programs, including a joint exploration of historical sites in Pyongyang by students from both universities.

“We are well aware of the dream for inter-Korean exchanges held by our seniors 30 years ago,” a student from SNU said. “We will make the dream of exchanges with Kim Il Sung University come true.”