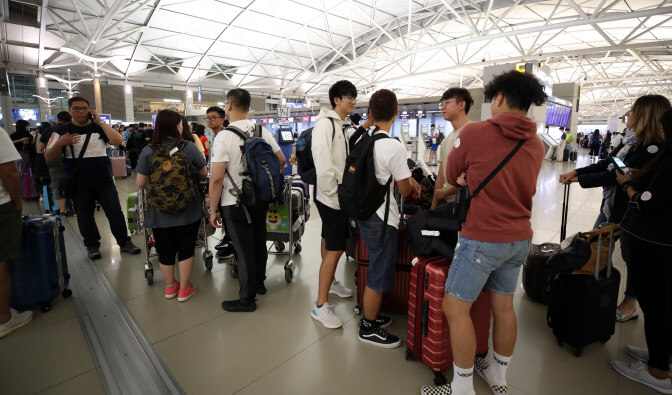 Check-in operations were halted at 4:30 p.m. after protestors blockaded departure gates, although incoming flights were allowed to land.

Meanwhile, airport staff could be seen scrambling to bring the situation under control while some protestors gave out food and drinks to travelers.

Two Korean Air flights and one Asiana Airlines flight were scheduled to depart Hong Kong for Seoul in the early hours of Wednesday after midnight.

“Most passengers were probably unable to check in, so these planes will probably head for Incheon Airport 90 percent empty,” said an aviation industry official.

One South Korean traveler said he was booked for a 2:25 a.m. plane to South Korea but couldn’t decide whether to head to the airport or find alternatives.

Another South Korean said he had checked in early, along with his luggage, but didn’t know where to spend his time after his 2 a.m. flight was canceled and he was placed on a 6:30 a.m. flight.

“I checked in early at noon because I was worried, completed all immigration procedures at 1 p.m., and have been in the airport lounge since,” said another traveler.

“They say my flight hasn’t been canceled and will be able to depart, but I am just hoping it works out.”

Some complained that the demonstrators were causing inconvenience to travelers.

“They can go home after they’re done protesting, but why are they stopping us from going home?” said one South Korean.

Another said, “I think it’s wrong to cause so much inconvenience to foreigners over a domestic issue. I want to ask the demonstrators if what they want is for foreigners to stop coming to Hong Kong.”