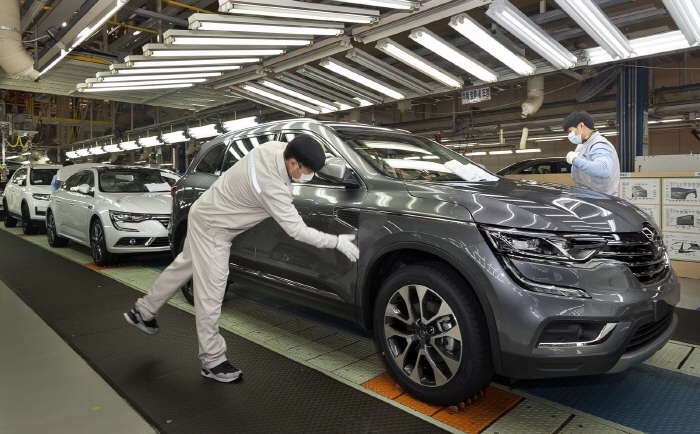 This photo, provided by Renault Samsung Motors Corp., shows workers manufacturing a QM6 vehicle at the company’s factory in the southeastern port city of Busan.

From January to March, GM Korea Co., Renault Samsung Motors Corp. and SsangYong Motor Co. — the Korean units of General Motors Co., Renault S.A. and Indian carmaker Mahindra & Mahindra Ltd. — sold a combined 43,109 vehicles in the domestic market, down from 56,549 units a year earlier, according to the companies’ sales data.

The three carmakers’ first-quarter performance marks the worst quarterly domestic sales result since they reported 47,045 units in the first quarter of 2009, the data said.

A prolonged pandemic and lack of new models are widely expected to further drive down their sales this year.

Debt-laden Ssangyong filed for court receivership in December, as it struggles with snowballing debts amid the pandemic.

A court-led restructuring process for SsangYong is set to begin as early as this week as U.S. vehicle importer HAAH Automotive Holdings Inc., the sole potential investor, didn’t submit a letter of intent to acquire the carmaker.

Renault Samsung has yet to sign a wage deal with its union for the year of 2020 and suffers from a lack of new models to boost sales, among other problems.

GM Korea has reduced production at its No. 1 Bupyeong plant in Incheon, just west of Seoul, since February due to a lack of semiconductor chips. Renault Samsung and SsangYong said an extended chip shortage will affect their vehicle production as well.

Meanwhile, the country’s five automakers that include Hyundai Motor Co. and Kia Corp. sold a combined 1.82 million units in the first quarter, up 7.4 percent from 1.69 million in the year-ago period.

The global chip shortage looks set to affect carmakers’ vehicle production in the second quarter and their earnings results.

Carmakers are readjusting their vehicle production volumes while competing with electronics companies to get more chips to minimize output reduction.

Hyundai plans to suspend production at its No. 1 plant in Ulsan, 414 kilometers southeast of Seoul, from April 7-14 due to parts shortages.