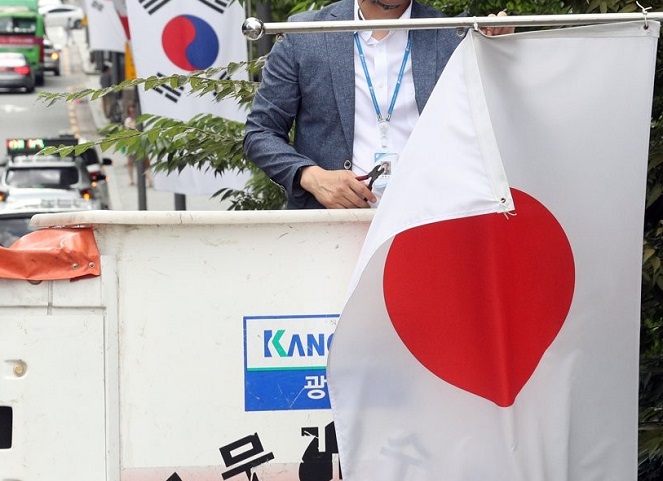 An official from Seoul’s Gangnam Ward removes the Japanese flag from among the national flags hoisted along a street on Aug. 2, 2019, in protest of Japan’s decision to enact broad new trade restrictions on South Korea earlier in the day. (Yonhap)

SEOUL, June 10 (Korea Bizwire) — For two consecutive years, the mutual perception between South Koreans and Japanese has been at its ‘worst’ since the normalization of Korea-Japan relations in 1965.

South Korean newspaper Hankook Ilbo and Japan’s Yomiuri Shimbun conducted a survey of 1,000 South Koreans and 1,063 Japanese, in which 81 percent of Japanese and 89 percent of South Koreans said that current Korea-Japan relations were ‘bad’.

Trust was also an issue, as 80 percent of South Koreans and 69 percent of Japanese said they could not trust each other.

Asked about the release into the sea of contaminated water from the wrecked Fukushima nuclear power plant, 94 percent of South Koreans said they could not accept it, while 47 percent of Japanese said they could.

South Koreans, on the other hand, mostly showed no interest in Japanese culture (43.2 percent), except for cartoons/animations (26.4 percent) and Japanese food (23.7 percent).