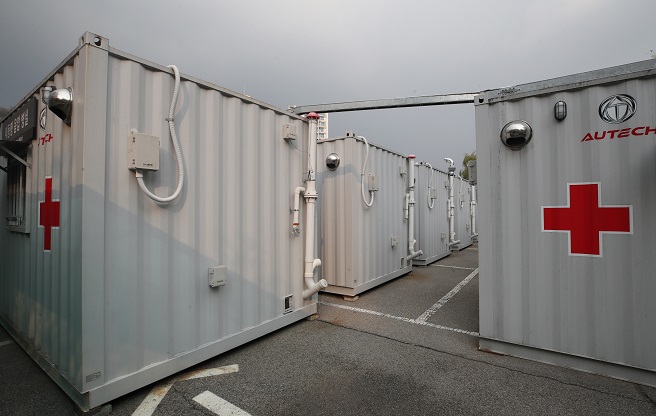 Makeshift wards made of containers are set up at a parking lot of the Seoul Medical Center in Seoul on Nov. 18, 2021. (Yonhap)

The country reported 3,034 new COVID-19 cases, including 3,011 local infections, raising the total caseload to 409,099, according to the Korea Disease Control and Prevention Agency (KDCA).

Friday’s figure marked a fall from an all-time high of 3,292 the previous day, but it is still the fourth-largest daily tally since the pandemic began. The daily tally exceeded 3,000 on Wednesday for the second time ever.

Daily cases have stayed in the quadruple digits since July 7 amid growing cluster infections.

The latest figure excludes the southern port city of Busan since it stopped reporting real-time figures. Daily cases are counted until midnight and announced the following day.

New cases in Seoul accounted for 46.9 percent of those tallied till 9 p.m., with the city emerging as a hotbed of virus infection.

The number of critically ill COVID-19 patients reached 499, down seven from the previous day, according to the KDCA. Critical cases rose to over 400 earlier this month for the first time since end-August and have remained at a high level.

The figure spiked to as high as 522 on Wednesday.

Of the locally transmitted cases, Seoul reported the second-highest figure of 1,401, while the surrounding province of Gyeonggi and the city of Incheon, west of Seoul, added 849 and 188, respectively.

Combined, the greater Seoul area accounted for 80.3 percent of the country’s total cases.

The government is grappling with a growing shortage of hospital beds reserved for seriously ill patients, as well as medical workers.

The bed occupancy rate in intensive care units for COVID-19 patients stood at 80.9 percent in Seoul and 78.2 percent in the greater Seoul region as of Thursday. The figure for the country as a whole came to 63.8 percent.

The health authorities earlier said that 75 percent of bed occupancy is a critical threshold.

The number of patients waiting to be admitted to hospital came to 520, up from 423 a day earlier, according to the health ministry.

There were no such cases on Nov. 1 when the country began relaxing monthslong strict antivirus restrictions, but the figure has since grown at a fast pace.

The country also reported six deaths among those who had been on a waiting list so far this month. 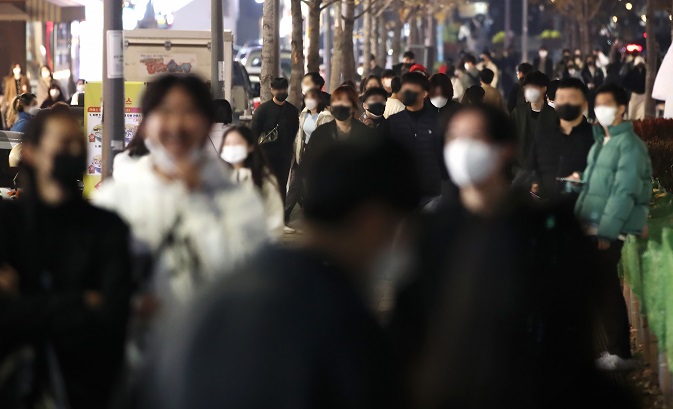 Prime Minister Kim Boo-kyum said that serious patients will be sent to available intensive care beds regardless of whether they are in the capital or non-capital areas to manage hospital beds more efficiently.

“There are concerns that our journey to return to normalcy may stop for a while if we cannot overcome this crisis,” Kim said Friday during a meeting with chiefs of 22 major hospitals in the metropolitan area.

“We will improve our hospital bed management system.”

The government also designated four additional hospitals as being reserved for COVID-19 cases, which have a combined 250 beds.

It also seeks to secure 1,144 additional beds at major hospitals for COVID-19 patients, while working to allow more people to be treated at home.

Daily infections have not shown signs of slowing down in recent weeks, as the government implemented the “living with COVID-19″ scheme this month for a gradual return to pre-pandemic life.

South Korea planned to move to the second stage in mid-December after a two-week evaluation period, but health authorities have warned the country may not be able to do so if the current trend continues.

On Wednesday, the KDCA introduced a new five-tier assessment system to evaluate the risk level of the pandemic on a weekly basis and to decide whether to continue the eased social distancing scheme.

If the risk level reaches the fourth degree or higher, the government is supposed to carry out an “emergency evaluation” of the pandemic situation for the potential enforcement of contingency plans while halting the relaxed curbs.

The government has also been working to administer booster shots to senior citizens and other vulnerable groups in a swift manner, as breakthrough infections among fully vaccinated people have grown due to the waning vaccine effectiveness.

“The effectiveness of vaccines has waned amid the spread of the delta variant, and we’ve seen more breakthrough cases,” Jeong said. “Additional shots are a must, particularly to ensure the safety and lives of high-risk people.”

The government shortened the dosage interval between regular vaccination and booster shots from six months to four months for individuals aged 60 or older, medical workers and other vulnerable groups. The interval for those in their 50s was cut to five months.