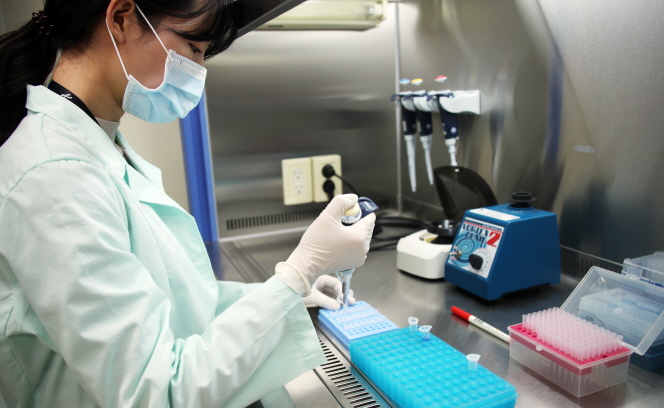 A researcher at Kogene Biotech Co. tests COVID-19 diagnostic reagents at the company’s research facility in Seoul on Feb. 5, 2020.

Earlier this year, a research institute under the Armed Forces Medical Command developed the rapid molecular diagnosis method and transferred the technology to local bio firms.

One of the firms, Ionebio, used the method to develop the so-called fast infection control system and recently signed a contract with the Silvio Pettirossi International Airport in the South American country to export the system, according to the Armed Forces Medical Command.

Compared to previous methods such as the polymerase chain reaction (PCR) test, the rapid system nearly halves the time required for diagnosis and has price competitiveness, the command said.

Another South Korean company recently exported around 600,000 test kits that also employ the military’s technology to airports in major European countries, including Portugal, the command said, adding that procedures are under way to receive approval from the U.S. Food and Drug Administration (FDA) for the test kit.