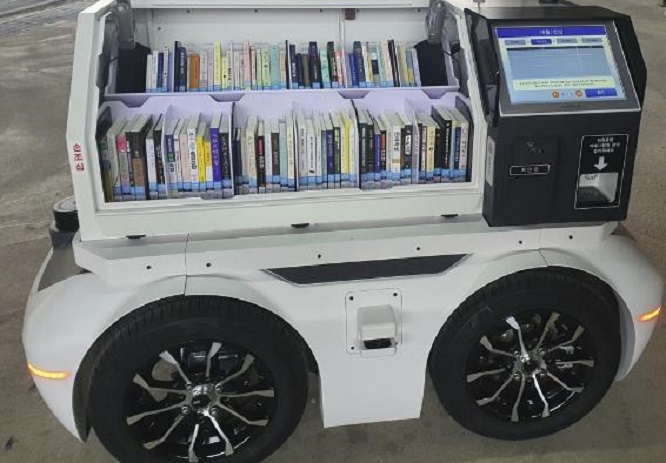 An autonomous library robot is seen in this photo provided by the Korea Chamber of Commerce and Industry.

SEOUL, Nov. 16 (Korea Bizwire) — Moves are afoot for the introduction of South Korea’s first self-driving library robot that autonomously moves around a park to lend books to citizens.

The Ministry of Trade, Industry and Energy and the Korea Chamber of Commerce and Industry had held a deliberation committee meeting regarding regulatory sandbox measures, which are exempted from strict regulations, and approved 14 cases as special regulatory exemptions.

Among such cases is the self-driving smart library robot proposed by the Seongnam city government.

Loaded with up to 100 books, the library robot, which is 1.8 meters long, 1.2 meters tall, and weighs 400 kilograms, distributes books to citizens while staying in specific areas of the city for a certain period of time.

Anyone with a membership certificate issued by the city’s public libraries can use the library robot.

Under current laws, a self-driving robot cannot operate on a sidewalk nor a crosswalk since it is regarded as a vehicle. In addition, only mobility devices with a weight of less than 30 kilograms can operate within a park.

However, the deliberation committee approved the library robot as a regulatory special case for demonstration, saying that other similar robots have already been tested without any accidents.