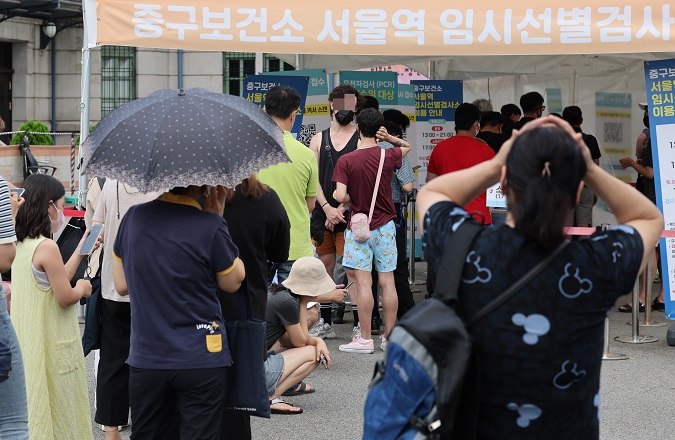 People wait to take COVID-19 tests at a makeshift testing center near Seoul Station in central Seoul on Aug. 14, 2022. (Yonhap)

SEOUL, Aug. 15 (Korea Bizwire) — South Korea’s new COVID-19 cases fell below 100,000 for the first time in seven days Monday due to fewer tests over the weekend amid the spread of a highly contagious omicron subvariant.

The country reported 62,078 new COVID-19 infections, including 396 cases from overseas, bringing the total caseload to 21,418,036, according to the Korea Disease Control and Prevention Agency (KDCA).

The number of critically ill patients came to 521, up nine from a day earlier. It jumped more than eight times from 65 reported on July 15.

By 9 p.m. Monday, local governments had reported 81,663 additional cases, up from 59,790 cases reported the same time the previous day. 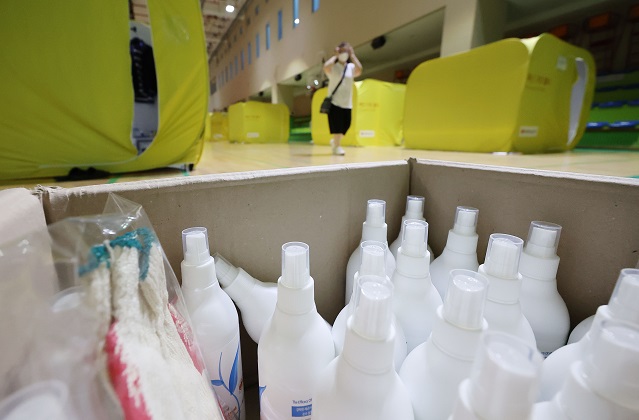 This photo taken on Aug. 14, 2022, shows disinfectants in a complex gymnasium in Sadang, southern Seoul, amid the spread of an omicron subvariant. (Yonhap)

The daily caseload had been on a downward trend after peaking at around 620,000 in mid-March. But new infections began to spike due mainly to eased virus curbs and the spread of the highly contagious omicron subvariant BA.5.

Imported COVID-19 cases had stayed above 400 in August through Sunday after the government relaxed entry restrictions for overseas travelers and resumed international flights. New cases from overseas hit a record high of 615 on Wednesday.