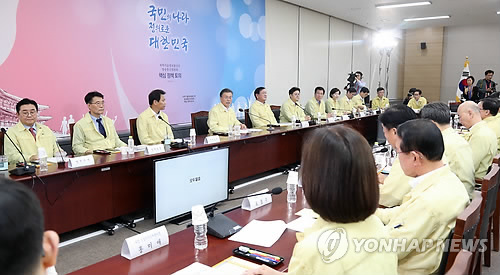 SEOUL, Aug. 22 (Korea Bizwire) — South Korea is seeking to focus on a long-term vision that can raise the overall competitiveness of the country as it utilizes its research and development (R&D) budget, the ICT ministry said Tuesday.

The plan was announced during a gathering of Ministry of Science and ICT policymakers and President Moon Jae-in. The policy briefing was the first of its kind since Moon took office May 10.

The decision comes amid growing criticism that the government’s decision on allocating the R&D budget has been focused too much on generating profit in the short term instead of looking toward the future. Scientists and experts have argued that the budget should be allocated to support projects that can last for years.

Also, the ICT ministry said it will map out detailed plans to create new jobs to capitalize on the changes as the world is transformed by the “fourth industrial revolution.”

The Moon administration has been advancing various projects to deal with the latest revolutionary changes that is characterized by a fusion of cutting-edge technologies, such as big data and the Internet of Things (IoT). The government hopes that innovative ideas will become actual businesses through science and technology, while generating new opportunities by converging different industries.

The ministry will act as an “enabler” to the changes by drafting the detailed plan by the end of this year, an official said.

The ministry said technologies, such as IoT and AI, are forecast to generate business opportunities and profits worth 560 trillion won (US$484 billion) by 2030.

“The ministry also launched a task force team so that core policies in science technology and the ICT sector can be implemented,” ICT Minister You Young-min said.

The ministry said it wants to push forward projects to help ordinary people understand the fourth industrial revolution so that they can get a better grasp of changes under way.