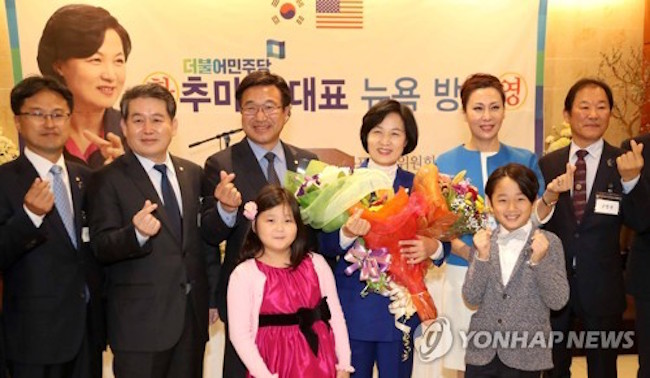 The party leader arrived in Washington earlier this week for meetings with U.S. officials, lawmakers and scholars, as well as to attend various events. (Image: Yonhap)

Choo Mi-ae of the Democratic Party met with members of the Korea Caucus in Congress and pointed to Washington’s large surplus in services trade with Seoul.

The allies recently began domestic procedures to amend the five-year-old free trade agreement, known as KORUS, due to President Donald Trump’s insistence it has widened the U.S. trade deficit with South Korea.

“If (the U.S.) puts too much pressure on a small area without looking at the overall picture, the timing is inappropriate because South Korea is currently in a very difficult situation,” Choo said.

“The threat of North Korea’s nuclear weapons program is expected to rise next year and we are in an extremely difficult situation because of China’s trade retaliation over THAAD,” she said.

It was a reference to China’s apparent suspension of business with South Korea over the latter’s hosting of the Terminal High Altitude Area Defense (THAAD), a U.S. missile defense system. Beijing argues THAAD is a threat to its own security.

Choo noted that South Korea will have to buy large amounts of weapons from the U.S. to counter the North Korean nuclear threat, which will help reduce the trade deficit.

The party leader arrived in Washington earlier this week for meetings with U.S. officials, lawmakers and scholars, as well as to attend various events.

Later Thursday, she traveled to New York and held a meeting with Korean-Americans living there, stressing that South Korea will remain a U.S. ally no matter how strong China becomes in the future.

“There are people who predict that when China becomes a tiger, South Korea will dump the United Steates and take China’s side,” Rep. Choo Mi-ae said during a meeting with Korean-Americans in New York. “(We) won’t hold hands with anyone that has a different system from or runs counter to democracy.”

Choo also said House Speaker Paul Ryan also told her that he doesn’t think South Korea will be pulled to China and that he firmly believes that the South is an ally that shares democratic values.