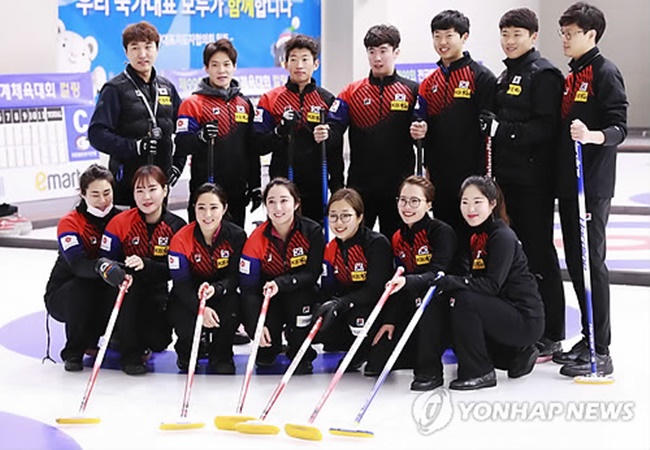 JINCHEON, South Korea, Jan. 10 (Korea Bizwire) – The head coach of the South Korean women’s curling team on Wednesday showed her complete confidence in bringing her home country its first Olympic medal in the sport at next month’s PyeongChang Winter Games.

“We’ve played with the big four powers of Canada, Switzerland, Sweden and Scotland on the world stage for the last two years. And we’ve never lost to the Scots,” said Kim Min-jung, head coach of the women’s curling squad, at the media day held in Jincheon National Training Center.

“You can expect a medal from us at PyeongChang. I can say this in full confidence.”

South Korea’s curling finished out of medals in the women’s event atthe 2014 Sochi Winter Olympics, but its performance has been improving.

It claimed silver in women’s curling at the Sapporo Asian Winter Games held in February last year, with a few more golds at regional tournaments and championships.

Kim said her curlers have a strong edge in teamwork, as the five-member female team has been together for about seven years and everyone knows each other inside out — two of them are sisters.

Curling is a team sport played by four players on the ice to score points by getting stones closer to the house center. Communication and cooperation between the skip, or the captain of the team, who delivers the stone, and two curlers, who sweep the ice to lead the stone to the house, are very important.

“We’ve prepared for the Olympic Games for the past four years,” said captain Kim Eun-jung. “We are now focusing on basics and fine-tuning our techniques before the games start.”

The men’s team is relatively more out of the spotlight than the women’steam, but its coach said his team has enough potential to attract media attention when the Olympics start in a month’s time.

“Our team players are young, but of great capacity,” said Lim Myung-sup, the men’s head coach. “They have little experience at world-class tournaments. My goal is to help them demonstrate their full ability at PyeongChang. It will bring the best result.”

In order to have some high-level experience before the Olympics, the curlers will compete at an event held in Canada next week, to which the world’s top 15 countries were invited.

“It’s our last check before the Olympics,” said Kim Chang-min, who captains the men’s team. “I know we are underdogs, but we are less burdened from a media spotlight. We can perform our best plays on our first Olympic stage.”