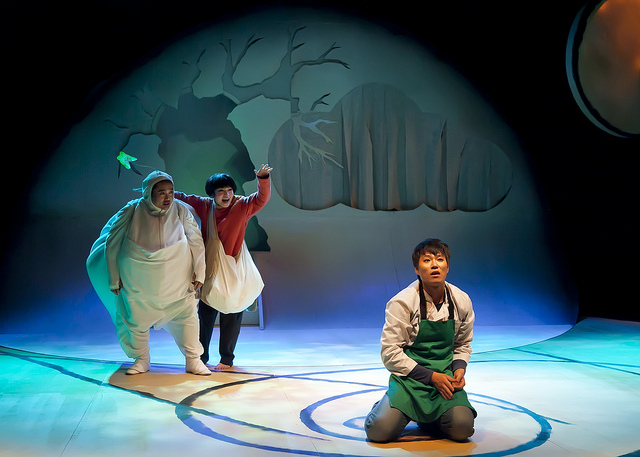 According to statistics from the Ministry of Culture, Sports and Tourism in 2012, 67 percent of artists and actors earned less than one million won per month, and 25 percent made less than 250,000 won, hinting that the majority (92%) of them were in the poor strata. (image: 형택 임/flickr)

SEOUL, June 24 (Korea Bizwire) – On June 22, an extra actor was arrested after using fake notes made as drama props. He pocketed the counterfeit 50,000 won notes while shooting a drama, and made unfair profits by using the fake bills in stores.

He said, “I haven’t been paid for the work I did on the drama. I had no way to making a living.” He now faces at least two years behind bars after spending 300,000 won worth of counterfeit bills.

Famous actors or actresses can easily make hundreds of million of won by shooting a drama or a TV commercial. But, for those who are not as lucky, it is a pie in the sky. Unfortunately, many actors who fail to achieve success choose to end their lives with suicide.

Recently, two theatric drama actors met their tragic deaths after suffering from the hardships of their lives.

Kim Woon-ha, 40, who also appeared in several films as a bit part actor, died of a heart attack alone at home. His body was found on June 19, five days after his death, and transferred to a nearby hospital as a person without family. His friends, who heard of his death later, held his funeral.

Three days later, actor Pan Young-jin, who played a leading role in a film, committed suicide by burning charcoal in his car. He suffered from depression, and he had even tried to commit suicide before by overdosing on sleeping pills.

Kim kept his passion for theatrical drama by making a living through manual labor. While he was acting in his last play, he received approximately 300,000 won a month. Pan, who debuted in 1978 as an actor, played a leading role in an independent film, but made almost nothing for his work.

The poor lives of artists and actors are nothing new. In 2011, Choi Go-eun, a screenplay writer in her early thirties, starved to death alone in her apartment. She passed away after going hungry for several days in a home with no electricity and gas supply.

After her death, the National Assembly enacted the Artist Welfare Act dubbed the “Choi Go-eun law” to support the lives of poor artists, actors and staff of theatrical dramas or films. However, the law could not effectively help artists, and similar cases have been reported since.

According to statistics from the Ministry of Culture, Sports and Tourism in 2012, 67 percent of artists and actors earned less than one million won per month, and 25 percent made less than 250,000 won, hinting that the majority (92%) of them were in the poor strata.

However, their situation has not improved in the three years since the enactment of the law. An official at the Artist Welfare Foundation said, “I see nothing has changed. It should be blamed on the structural problem that certain entertainment agencies and actors or actresses monopolize fortune and fame.”