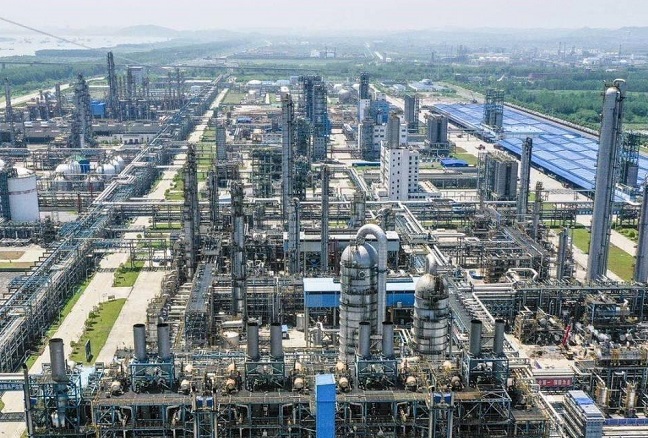 This photo, provided by SK Global Chemical Co. on June 16, 2021, shows its joint venture chemicals plant in the Chinese city of Wuhan.

SEOUL, June 16 (Korea Bizwire) — Sales of South Korean large firms’ Chinese units have tumbled nearly 28 percent over the past four years due to a bilateral row over the deployment of an advanced U.S. missile defense system here and other reasons, a corporate tracker said Wednesday.

According to CEO Score, 320 Chinese production units of 113 large corporations posted 103.98 trillion won (US$93 billion) in combined sales in 2020, down 27.5 percent from four years earlier.

The plunge resulted from the spat between Seoul and Beijing over the deployment of the Terminal High Altitude Area Defense (THAAD) battery in southern South Korea, the Sino-American trade war and a decline in the competitiveness of production in China.

In July 2016, South Korea and the United States agreed to deploy the THAAD battery, prompting Beijing to impose restrictions on tours to the neighboring country a month later.

Hit hardest were auto and parts subsidiaries, whose sales nose-dived nearly 60 percent to 22.3 trillion won over the cited period.

Sales of 59 IT, electronics and electric corporations decreased 18.6 percent due mainly to the closure of smartphone plants by Samsung Electronics Co. and LG Electronics Inc.

In contrast, petrochemicals, shipbuilding and machinery, steel, pharmaceutical, and food and beverage units’ sales went up over the cited period.

Samsung Electronics recorded the biggest drop over the cited period, with the top line of its Chinese unit slumping to 5.3 trillion won last year from 24.1 trillion won in 2016.