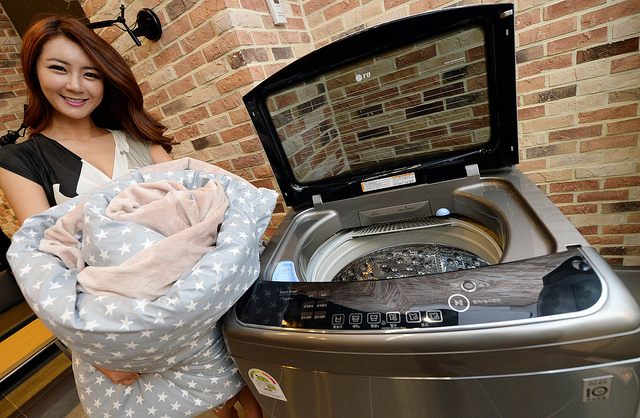 Sales of large washing machines with load capacities of more than 16kg have accounted for almost 50 percent of all sales this year. (image: LG Electronics)

SEOUL, April 9 (Korea Bizwire) – The most popular size of full-automatic top-loading washing machines has increased to over 16kg thanks to their increased performance and enhanced space efficiency.

According to Hi-Mart, an electronics retailer in Korea, sales of large washing machines with load capacities of more than 16kg have accounted for almost 50 percent of all sales this year. After falling to a 15 percent share in 2013, sales of the big washers passed the 30 percent mark in 2014.

Meanwhile, the market share of mid-sized washing machines between 11kg to 15kg fell to 45 percent this year after reaching a high of 75 percent in 2013.

Industry observers attribute the rising share of large-sized washers to more efficient designs, which allow for larger sized tubs without significantly increasing the overall size of the machines.  Many of the new larger models are equal in size to older mid-sized ones thanks to enhanced space efficiency.

A Hi-Mart official said, “In the past, clothes were tangled or spoiled in top-loading washing machines, so many customers looked for drum washing machines. However, as the electronics companies have improved such defects, customers are increasingly interested in large-sized top- loading machines.”