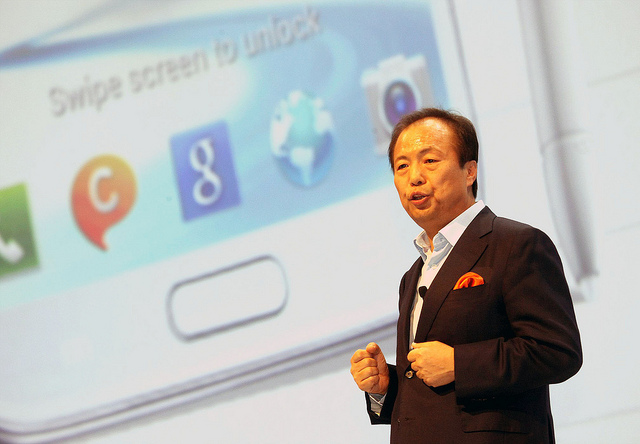 SEOUL, March 31 (Korea Bizwire) — The head of Samsung Electronics‘ mobile division grabbed the title of the highest-paid executive in South Korea last year thanks to a hefty bonus for the division’s robust performance in 2013.

Shin Jong-kyun topped the list of corporate executives’ annual salaries by getting paid 14.57 billion won (US$13.13 million) in wages last year, more than twice the 6.2 billion won he received in 2013, according to the tech giant’s annual report disclosed on Tuesday.

The sharp rise in his salary was attributable to a special bonus paid in the first quarter of 2014 after the tech giant became the world’s largest handset maker in 2013.

The mainstay business, however, posted sluggish earnings last year in the face of tougher competition with Apple in the premium market and Chinese manufacturers in the lower-end segment.

Samsung Electronics, the nation’s largest firm by market value, did not release wage information for its chairman, Lee Kun-hee, and vice president, Lee Jay-yong, his only son and heir apparent, because they dropped their memberships on the board of directors.

Hyundai Steel paid him 11.56 billion won, which includes 10.8 billion won in retirement allowances for his role on the board of directors since 2005. He stepped down from the post last year.

Koo Bon-moo, the head of LG Group, the nation’s fourth-largest conglomerate, got paid 4.42 billion won last year, slightly up from 2013, the company said.

LG Electronics, its home appliance and smartphone unit, saw its net profit more than double in 2014 from the previous year on upbeat sales of its TV sets and flagship smartphone G series.

In South Korea, companies are required to disclose the salaries of corporate executives who earn more than 500 million won by law.

Major business groups usually release salary information shortly before the deadline on March 31, in an apparent move to water down shareholder discontent as hefty payment packages for executives have sparked criticism in the past.

Chey Tae-won, the head of SK Group, faced a strong backlash after he became the nation’s highest-paid chief executive officer (CEO) in 2013, receiving 30 billion won in wages from four SK affiliates, even though he was serving a jail term for an embezzlement charge.

Chey later resigned most of his posts on the board of directors and promised to donate all of his salary to appease public anger.