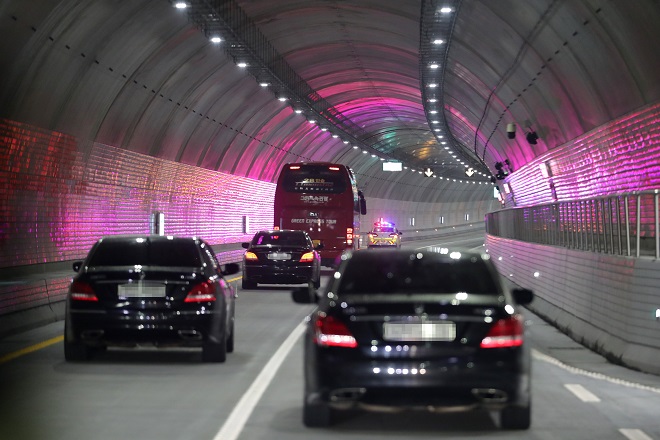 A bus and cars carrying government officials run through the Boryeong Undersea Tunnel, central South Korea, during a test drive on Nov. 30, 2021. (Yonhap)

The company announced on Tuesday that its “TV white-space (TVWS) serious industrial disaster prevention solution for underground tunnels” was designated as a regulatory sandbox case by the Ministry of Science and ICT, which is exempted from strict regulations.

TVWS refers to the unused TV channels between the active ones in the VHF and UHF spectrum.

Previously, two-way radios were used inside tunnels where it is not easy to install communication networks.

However, since communication between inside and outside tunnels was impeded due to distance, it was difficult to grasp the status of workers when accidents occurred.

Against this backdrop, Hyundai E&C, together with a local firm Innonet, developed wireless communication technology that makes use of TVWS.

Since it uses mobile TVWS receivers, there is no need to extend communication lines. In addition, if receivers are installed at regular intervals, Wi-Fi communication is possible throughout the entire tunnel.

This technology is advantageous in communicating with the surface from deep underground, while offering the possibility to communicate with a transmitter at a distance of up to 10 kilometers away.