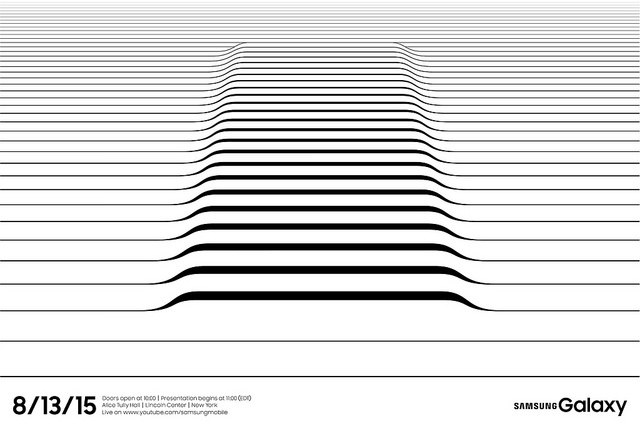 The invitation from the South Korea-based top smartphone maker has a picture of lines that form a shape like a smartphone, which looks similar to its quirky edition of the flagship model, the Galaxy S6 Edge, which was released in April. (image: Samsung Electronics)

SEOUL, July 28 (Korea Bizwire) – South Korea’s top tech giant Samsung Electronics on Tuesday sent out invitations for what is expected to be an unveiling event of its next flagship phablet, presumably the Galaxy Note 5, on Aug. 13 in New York.

The invitation from the South Korea-based top smartphone maker has a picture of lines that form a shape like a smartphone, which looks similar to its quirky edition of the flagship model, the Galaxy S6 Edge, which was released in April.

The Galaxy S6 Edge was initially considered an upbeat sister of the flagship Galaxy S6, with the industry’s first screen that is curved on both sides. But its demand reportedly outpaced supply for a few weeks after the release.

Market sources earlier anticipated that Samsung will also release a bigger edition of the Galaxy S6 Edge as the company won a trademark for the S6 EDGE+ earlier this month.

Experts expect the Galaxy Note 5 may come with a 5.9-inch display, which is larger than its predecessor’s 5.7-inch screen. Others, however, predict that Samsung may choose not to do so as the bigger size will make the model no different from tablet PCs.

With the S pen also being one of the key features of Samsung’s phablets, a cross between smartphones and tablet PCs, industry watchers also expect the presumed Galaxy Note 5 will allow users to detach the pen through voice or gestures. The tech giant has also won a patent for that technology.

The presumed Galaxy Note 5 and the Galaxy S6 Edge Plus will play a crucial role in Samsung’s handset business, which has been facing challenges from Chinese rivals over previous quarters, experts added.

The event also came earlier than expected. Samsung has usually revealed its phablets at the Internationale Funkausstellung (IFA) in Germany in September.

The tech giant’s early start apparently came as its U.S. archrival Apple is expected to showcase the iPhone 6S and iPhone 6S Plus in September, experts said.