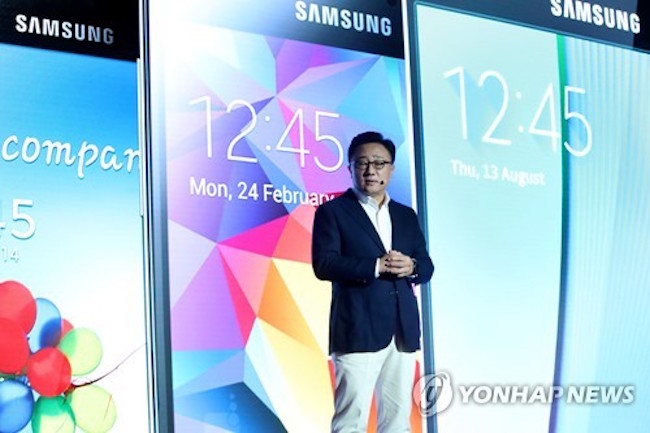 Samsung Electronics Co.’s upcoming Galaxy S9 smartphone is likely to feature an improved “Infinity Display” and a camera that can shoot DSLR pictures, according to industry sources and news reports Wednesday. (Image: Yonhap)

An invitation released by Samsung to the media bore the slogan “The Camera. Reimagined,” suggesting huge improvements in the camera department, industry watchers said. The smartphone is set to be unveiled during the Mobile World Congress, which kicks off Feb. 25.

The new smartphone reportedly has a camera with a variable aperture arrangement that can allow users to take pictures at a very fast f/1.5 to a slightly slower f/2.4, depending on conditions, the sources said.

A lower f-stop translates into more light hitting the sensor resulting in better low-light performance. A better aperture on a lens can permit higher shutter speeds and out-of-focus blur that is favored for portrait shots by many photographers.

The main camera on the South Korean tech giant’s current flagship Galaxy S8 smartphone, is still rated one of the best in the business, with an aperture of f/1.7 compared with the slightly better f/1.6 adopted by LG Electronics’ V30 smartphone.

While the Galaxy S9 Plus will feature a dual camera with optical zoom functionality, the smaller Galaxy S9 will have just a single module, the sources predicted.

Media leaks regarding the upcoming smartphone suggest that the new camera will carry Samsung’s latest ISOCELL mobile imaging sensor, which can permit more shots to be processed more quickly by the smartphone.

There have been hints that the S9 may be able to easily shoot hundreds of shots in very quick succession so the images can be viewed in super slow motion.

The new models are widely expected to ship with the newest Infinity Display that curves around the edges of the smartphone and gives the device an almost bezel-like appearance.

Such curved screens have been the trademark of the company’s past flagships like the Galaxy S8 and Galaxy S8 Plus.

The company will also reportedly showcase a mobile application processor (AP) with enhanced features for multi-tasking, as well as artificial-intelligence platforms that could be used in the Galaxy S9 smartphone.

The Exynos 9 (9810) is based on second-generation 10-nanometer FinFET technology and is optimized for premium smart devices, as it boasts the industry’s most advanced long-term evolution (LTE) network modem.

Samsung is widely forecast to launch the Galaxy S9 and S9 Plus in lilac purple, midnight black, titanium grey and blue coral, although these colors may not hit the market at the same time, with some not available in certain countries. Samsung said that it is unveiling lilac purple on its flagship for the first time.

The sources predict preorders to kick off sometime early March in South Korea and prices will be around 1 million won (US$920), higher than last year’s Galaxy S8.