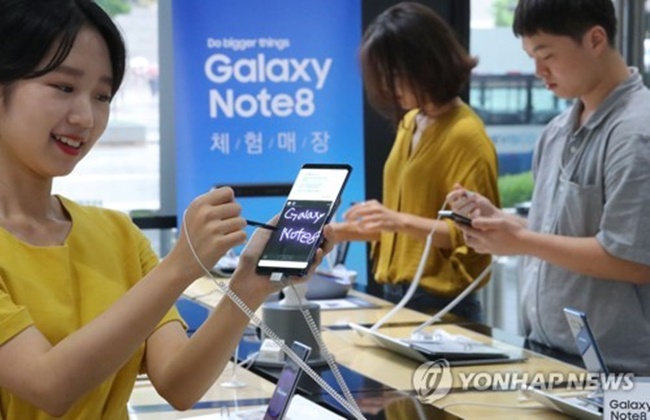 The South Korean giant plans to ship the new phablets to early adopters starting Sept. 15, ahead of the official released slated for Sept. 21. (Image: Yonhap)

SEOUL, Sept. 7 (Korea Bizwire) – Samsung Electronics Co. on Thursday kicked off preorders for its new flagship smartphone, the Galaxy Note 8, ahead of the official release slated for later this month.

The South Korean giant plans to ship the new phablets to early adopters starting Sept. 15, ahead of the official released slated for Sept. 21.

Samsung Electronics finalized the price tag of 64 gigabyte Galaxy Note 8 at 1.09 million won (US$962), which is slightly higher than its predecessor, the Galaxy Note 7, which was priced at 989,800 won.

The Galaxy Note 8 boasts a 6.3-inch display, its signature S Pen stylus and a dual-lens camera setup. With the Infinity Display, the company has almost eliminated side bezels to give the device a simple yet immersive design. The phablet boasts two optically stabilized 12-megapixel lenses that will allow users to take both wide-angle and telephoto shots.

The Note 8 is set to compete directly with LG Electronics Inc.’s V30 smartphone, along with the new iPhone set to be showcased by U.S. giant Apple Inc. later this month.

LG plans to start preorders of the LG V30 next Thursday, with the official release slated for the same date as the Galaxy Note 8.