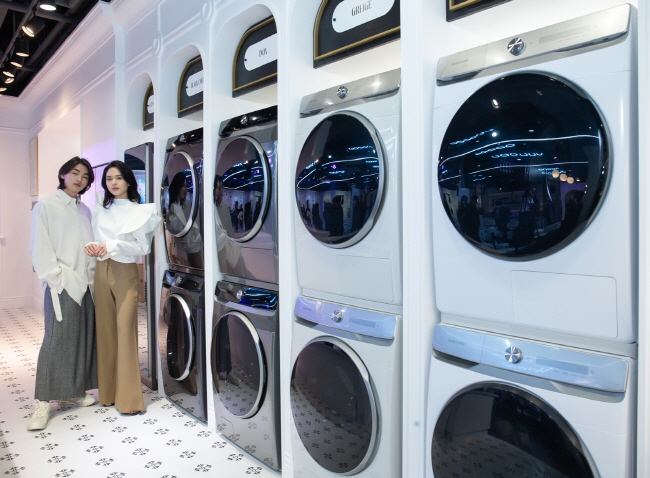 In this photo provided by Samsung Electronics Co., models stand next to Samsung’s new washing machines and dryers at a retail store in Seoul on Jan. 29, 2020.

The tech giant unveiled its Grande AI range of washing machines and dryers — part of the company’s Project Prism, which aims to reflect consumers’ lifestyles and offer personalized products.

The new washers and dryers come with an upgraded self-learning ability offering customized washing and drying, according to Samsung.

Samsung said its “all-in-one” function allows consumers to control their dryer through their washer.

The latest products can also remember frequently used wash or drying modes and propose optimal settings. Based on the washing machine’s settings, the AI can automatically set up the best dryer cycle, the company added.

Samsung said its AI learned from more than 12 million laundry cycles and will get smarter as consumers provide it with their laundry routines.

The new washing machines can also detect the volume and weight of clothes and determine the level of soiling, and the dryers are equipped with bigger compressors and heat exchangers, providing upgraded drying performance, according to Samsung.

With its AI, Samsung claimed that it only takes 36 minutes to wash and dry a batch of shirts.

Samsung didn’t reveal its domestic sales target of washers and dryers for the year but vowed to improve the market share. The company claimed it accounts for more than half of the washing machine market in South Korea.