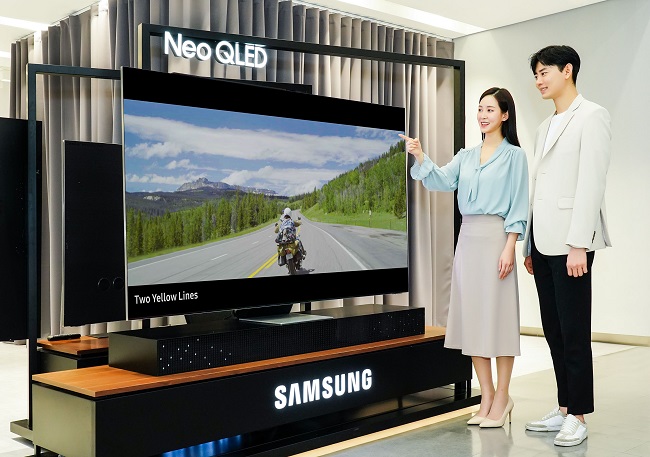 SEOUL, Aug. 24 (Korea Bizwire) — South Korea’s top two TV makers — Samsung Electronics Co. and LG Electronics Inc. — represented half of the global TV market in the first half of the year, a report showed Tuesday, as they maintained their leadership in the premium segment.

Samsung accounted for 31 percent of the global TV market in terms of sales revenue to defend its top status in the first six months of 2021, while LG followed with a 19 percent share, according to data from industry researcher Omdia.

Japan’s Sony came in third with 9.3 percent followed by Chinese makers TCL with 7.4 percent and Hisense with 7.3 percent.

By volume, Samsung made up 21.2 percent of the global market after shipping 21.03 million TVs in the first half, up 10.3 percent from a year earlier. It was the first time since 2016 that the company’s first-half sales volume topped 20 million units.

Samsung also had the dominant position in the 80-inch or larger TV segment with a market share of 51.9 percent.

“Considering second-half TV sales are usually above the first half’s, our QLED TV sales are expected to reach 10 million units this year,” Samsung said. “We are certain to achieve the No. 1 status for 16 consecutive years.” 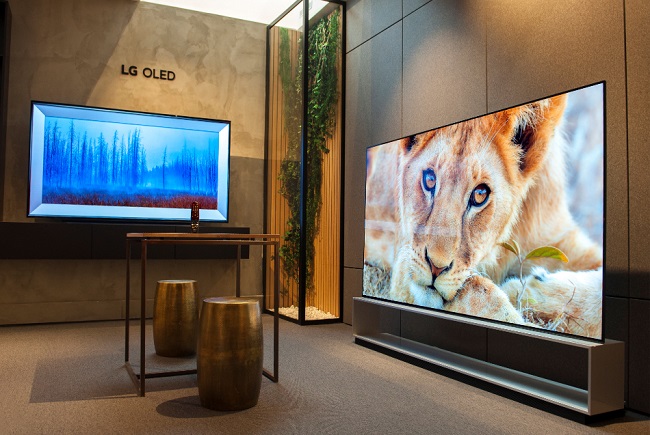 This photo provided by LG Electronics Inc. on June 25, 2021, shows the company’s OLED TVs displayed at a shop in Paris.

LG sold 13.56 million TVs in the first half, up 25.8 percent from a year earlier, thanks to increased supply and enhanced price competitiveness of OLED displays.

LG shipped 1.73 million OLED TVs in the first half, representing more than 63 percent of the worldwide OLED TV market.

In particular, the company’s OLED TV shipments reached 945,600 units in the second quarter, its largest-ever quarterly volume since the introduction of OLED TVs in 2013.

“This is meaningful considering that the average selling price (ASP) of LG’s OLED TVs is almost $2,000, nearly four times larger than that of LCD TVs,” it said.

When it comes to the second-quarter alone, the global TV shipments came to 47.85 million units, up from 45.64 million units a year earlier.

However, it was down from 51.25 million units in the first quarter due to seasonality and production disruptions from the resurgence of COVID-19.