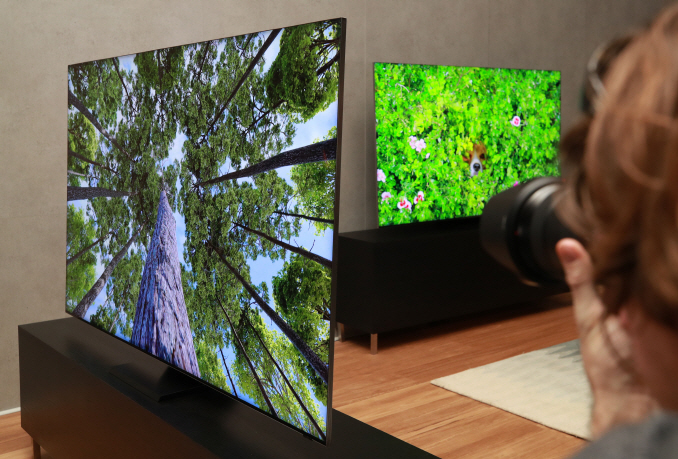 Samsung and LG were the two main players anchoring South Korea at the Consumer Electronics Show (CES) 2020, which wrapped up its four-day journey in Las Vegas, Nevada, last week.

Among various products they showcased at CES 2020, Samsung and LG were busy promoting their TV sets, claiming that their products and technologies are the industry’s best.

At IFA 2019 in Berlin, Germany, the two sides directly challenged each other, with LG displaying Samsung’s 8K QLED TV at its booth for comparison with its NanoCell 8K TV.

At CES 2020, the 8K TV battle was not intense as it was last year since both LG and Samsung earned the 8K UHD logo from the U.S. Consumer Technology Association (CTA) ahead of the tech show.

LG previously attacked Samsung for not meeting the threshold of the International Committee for Display Metrology (ICDM), a trusted international agency for setting TV quality standards.

ICDM states that 8K TV’s must have a 50 percent minimum contrast modulation (CM) level, along with at least 33 million active pixels.

After Samsung decided to meet the 8K threshold, LG said at CES 2020 that it “welcomes” the rival’s move, though some might feel a little sarcasm in its voice.

“In a competition between South Korea’s high-end TV manufacturers, we always thought that the players should at least meet some extent of standards, and we welcome that (Samsung) decided to follow the standards,” Park Hyung-se, who is in charge of LG’s Home Entertainment business division, said at a press meeting on the sidelines of CES 2020.

“As you know, we have been consistently competing in the market focusing on three aspects: sound quality, design and picture quality.”

“Competition is important, but isn’t it right to compete for better things?” said Han Jong-hee, who heads visual display business at Samsung.

“If the competitor’s product is ‘real’ 8K, then what can we say about consumers who bought our 8K products?”

The two sides have been exchanging bitter words over QLED and OLED for years, with LG claiming that Samsung’s QLED TV is merely a liquid crystal display (LCD) TV with a backlight panel that has an additional quantum dot (QD) sheet.

At CES 2020, Samsung’s Han said that the company will not pursue making TVs using OLED panels, citing that it doesn’t have facilities for making large-size OLED sheets.

OLED, or organic light-emitting diode, is highlighted by self-illuminating pixels that are known to deliver perfect black, and it is the main display used for LG’s premium OLED TVs. 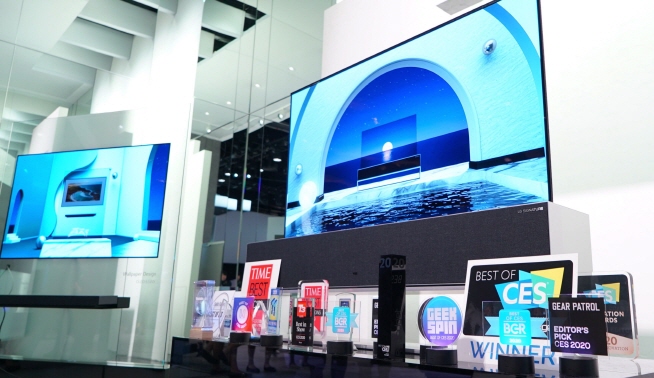 But Jeong Ho-young, CEO of LG Display Co., a LG Group affiliate and the No. 1 TV-sized OLED panel maker, pointed out that Samsung’s next-generation display panel, known as “QD-Display,” is basically the same as OLED.

“We believe that (the) basic structure and production process of QD-Display should be interpreted under that of OLED,” Jeong said at a press meeting.

“I believe our WOLED has advantages in luminance and reflection performances. QD-Display may have (a) better color gamut, but our WOLED products have differentiated strengths in other areas.”

But unlike OLED displays, it uses inorganic material that minimizes luminance decay concerns.

At CES 2020, Samsung announced that it will launch smaller, home versions of its Micro LED TVs in the second half of the year.

LG Electronics showcased a 145-inch Micro LED TV at its CES booth but said it will not aggressively move into living room-accommodating Micro LED TVs yet due to manufacturing costs and expensive prices.

“I think its advantages in size expansion and luminance can be best shown in commercial-use products. We plan to focus on 100-inch to 150-inch size products.”

Samsung said it is confident of enhancing its yield rate and capacity for the mass production of Micro LED TVs.

Samsung’s visual display business chief Han said that the company’s annual production capacity of Micro LED TVs is currently below “four digits,” but that will be increased significantly with upgraded manufacturing processes.

“You have various methods, from inkjet printing to stamp printing, to install micro LED chips, but I can’t tell which process we will use,” he said. “But I can say that we are getting ready for the mass production of Micro LED TVs.”