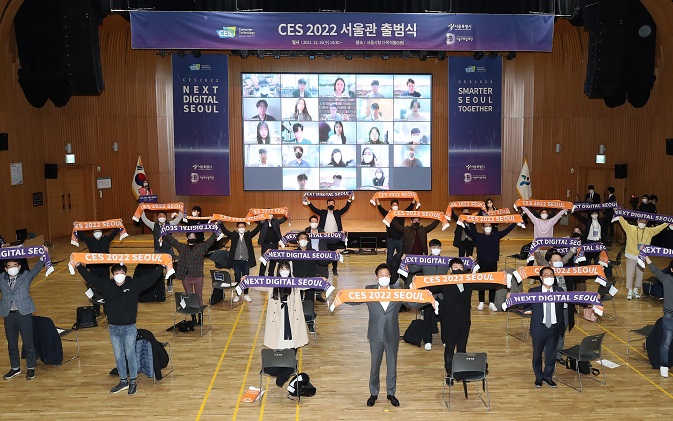 In this file photo, Seoul Mayor Oh Se-hoon (C) and officials pose for photos during an event held at Seoul City Hall on Dec. 15, 2021, to mark the launch of a Seoul booth at the Consumer Electronics Show 2022. (Yonhap)

SEOUL, Jan. 4 (Korea Bizwire) — The city of Seoul will open a booth at the Consumer Electronics Show (CES) in Las Vegas this week to help pitch innovative technologies by smaller firms based in the city, officials said Tuesday.

The Seoul booth will open inside the event’s Eureka Park section, an exhibition area for startups, on the first day of the exhibition on Wednesday (U.S. time), according to the Seoul Digital Foundation, a digital arm of the city government.

Measuring 310 square meters and covering 25 tech firms from the South Korean capital, this year’s Seoul booth will be the biggest in scale since its first participation in the CES in 2020.

Six of the South Korean firms featured in the city’s booth, including Algocare and klleon, have been designated as winners of the show’s Innovation Awards in an advance review process, the foundation noted.

During the CES’ three-day run, the Seoul booth will host “Seoul Pitching Day” every day to promote the South Korean tech firms to global investors and buyers and hold a forum on the last day on the issue of progress in digital technology, the foundation said.